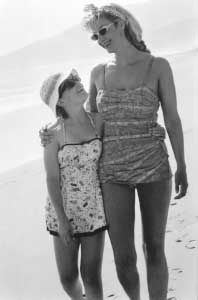 Tumbleweeds float around western landscape blown by wind, catching on to firm objects for a short time only to be blown away again.  Mary Jo Walker (Janet McTeer) drifts along like a tumbling tumbleweed.

After four failed relationships with men from which she just ups and leaves when violence begins, she finds her daughter Ava (Kimberly J. Brown), named after Ava Gardner, needs to settle.   Mary Jo is consistently attracted to men who after a while attempt to dominate and when they are unhappy take it out on her.  It would be pleasant for her to learn that Dan (Jay O. Sanders) who she considers a friend could also be a lover.  But Mary Jo is firm within her character, she doesn't change.

She fights to keep her head above water through a series of jobs which she generally hates.  Her tumbling is just one argument away.  But this time in Southern California, Ava puts down roots.  She meets her first boyfriend, gets a part in the school play and has girl friends.  She also discovers Dan, a widower, is a friend.  When mom is ready to move again she refuses and runs away, even though mom's newest lover Jack Ranson (Gavin O'Connor) is at the point where beatings will begin.

The need of Mary Jo to impale herself on the thorn of a Mr. Macho while the gentle man she respects and likes does not appear on her love horizon presents a classic dilemma for many women.  Sex and love don't come with disclaimers and cautions.  Mary Jo through it all never loses her enormous sprit and hope and she demonstrates her ability to relate to her daughter more effectively than a traditional mom.  Her illustration to Ava, of how to kiss and how to accept the use of sanitary napkins is off beat, funny and impressive.

In the end I wanted to shake Mary Jo's hand because she realized as we do, that she doesn't have to be a tumble weed and that she is an impressive parent.