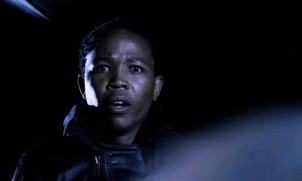 
A fearsome 19-year-old is at the center of Tsotso, South Africa's nominee for Best Foreign-Language Film.

This worthy nominee directed with fervor and insight around a Johannesburg shantytown by Gavin Hood is more than a gangsta tale. It has some of the resonance of Fernando Meirelles' City of God, and the narrative has something in common with the touching Czech Republic picture, Up & Down.

The squalid streets have a luster to them as the cinematography by Lance Gewer highlights the iniquity from the novel by Athol Fugard.

The post-adolescent is cold and expressionless with the titular nickname, acted with surprising depth and versimilitude by Presley Chweneyagae.

His neighbors ridicule him for the baby-faced heartless person that he is: "Did you learn to drive?"

A violent moment early on has shades of Bernard Goetz, as a portly fellow purchases a scarf and stuffs an envelope back into his suit pocket.

Spastic outbursts occur from a person trying to find a true stasis of apathy from the brutality of his life to this point.

Tsotsi will branch out by himself after beating up an alcoholic/felon (Mothusi Magano) and quickly carjack a vehicle with a 3-month old in the back seat after wounding its mother, shooting her in the stomach.

Hood finds much emotion and humanity from his protagonist as abandonment doesn't linger too long in his mind. There is feeling of caring into his forgotten life as he deals with the baby using newspaper, condensed milk and crusts of bread. Tsotsi points a gun at Miriam, a widow, an affecting Terry Pheto, to breastfeed the youngling.

Like City of God, a non-linear approach conveys the brutality from a Rottweiler having its back broken, to his AIDS-infected mother, and running away to a field with concrete conduits.

The music summons lyrical African "Kwaito" and the production reaffirms the many who will become new "Tsotsis." Chweneyagae is quite a figure to endow so much into a person pummeled in so many ways. This film simmers in a way that makes one felt by an endless struggle faced in South Africa.