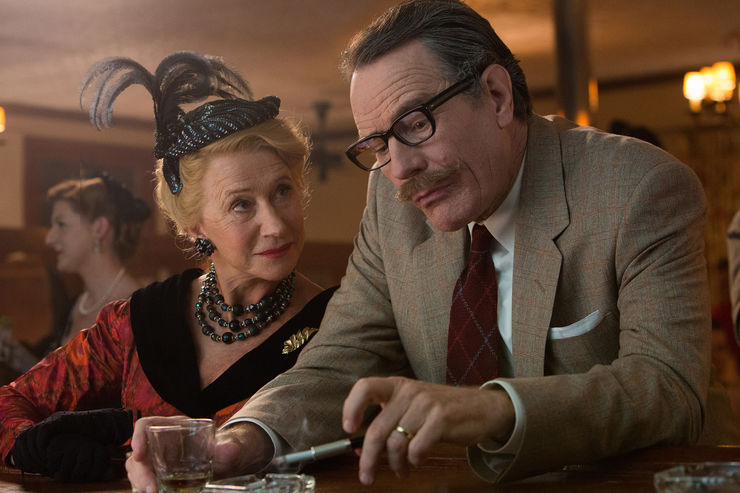 
Bryan Cranston has gotten much exposure of late for his stage portrayal of Lyndon Baines Johnson which he'll continue on HBO (All The Way). But, the Breaking Bad star doesn't back down from a bold, beleaguered scenarist during the 'Red Scare.'

In Jay Roach's new unoriginal but quite watchable political docudrama Trumbo Cranston is Hollywood's version of Edward R. Murrow - fiercely toiling against the denial of civil liberties from because of his communistic leanings. Yes, the successful career of Trumbo looks to be derailed during the 1940s, but there's a renaissance from the prototypically prolific Roman Holiday and The Brave One a decade later where a nom de plume and a lead writer were credited.

Roach has been in this spectrum before on the small-screen in Game Change and Recount to systematically provide thepoint-of-view that many may have heard about (but fuzzy in the details) without really embodying the motifs and the paramount issues beneath the surface. Even so, it's hard not to appreciate how Cranston (solid in lesser roles in recent films ranging from Godzilla and Argo to Drive) engages this undauntedblacklisted talent. Behind him there are Diane Lane and Elle Fanning in familial parts of Cleo and Nikola, respectively, while Helen Mirren makes Hedda Hopper queenly scornful. It's hard not to point out the entertainment quotient of the often reliable John Goodman (again from Argo and The Artist) as producer Frank King. You may not always recognize other actors (David James Elliott from TV's Jag) who play icons like John "The Duke" Wayne, but Dean Gorman and Michael Stuhlberg have their moments as Kirk Douglas and Edward G. Robinson.

The conventional approach evident in the filmmaking, however, proves to be an asset for creativity in professional longevity. Trumbo is rendered in unspectacular cinematic terms, but the crafty Cranston abides by a busy attentiveness (which goes a long way in a pursuit of interesting new characters - he may appear in the Marvel universe some day as a baddie according to recent reports) to deliver an uncanny effectuality to a limited, though enkindled, biopic.