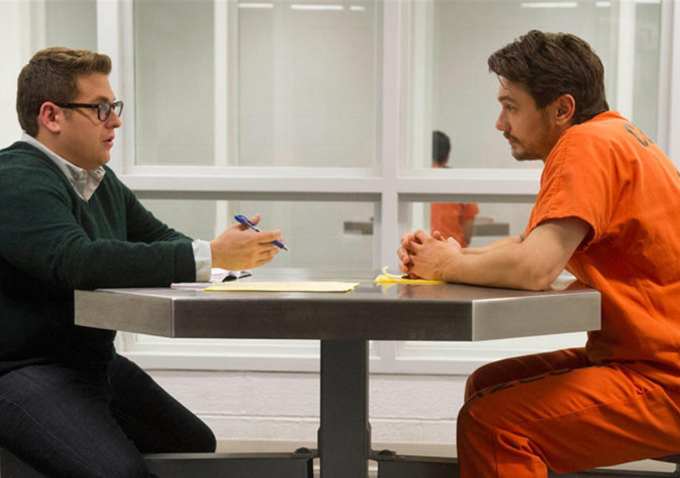 
Jonah Hill and James Franco (in some casting-against-type) headline Rupert Goold's cat-and-mouse yarn True Story, far from the outrageous apocalyptic debauchery of This Is The End.

Felicity Jones (a revelation in The Theory of Everything which brought Eddie Redmayne an Oscar), Ethan Suplee, Robert John Burke, and Gretchen Mol co-star in an adaptation of disgraced NY Times reporter Mike Finkel (here endowed by Hill of 22 Jump Street and Moneyball, as well as wonderful support in The Wolf of Wall Street ).

A union of deception of restitution is knotted in arcane sociopathic machinations has an intriguing set-up: the ostracized Finkel is unable to get the necessary support from his consoling missus Jill (a misused Jones). However, when reports of Franco's madman Christian Longo being nabbed by the FBI in Mexico for the deaths of his wife and three kids draws Finkel's attention because the perp was using his identity. He'll meet with Longo and collaborate on a tome that reenacts aspects of a cold-blooded killer.

The performances Goold elicits from his leads are utilitarian as one finally discovers what intentions he's facing, staleness isn't overcome by an evenness or enough melodrama to balance some levity during many a conversational interlude. Which makes their dilemma hardly viable from an argent production only goes so far as the old adage "truth stranger than fiction" repudiated in this case where the vapid and soporific undermine any fluctuating cinematic buoyancy.

How the opposing forces unfold from commonality at least from scribbling leads to Longo having to listen to a classical tune complements of a hardly jovial Jill whom he's contacted. You notice a wantonness of timeless proportions that just doesn't give enough veritable malleability to stance of a pressured Finkel despite the committed efforts of an obstinate, scathed Hill and a furtive Franco. True Story will chomp subtly enough to lure many into its tricky pathos but not those realizing its venal circumventions.