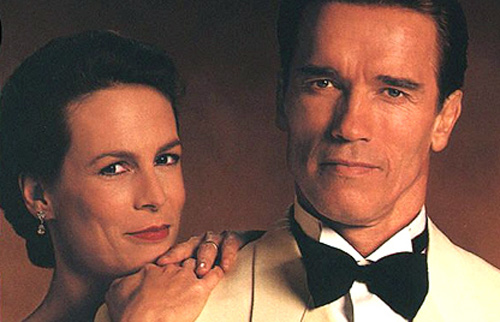 
Arnold Schwarzenegger as a mild-mannered computer salesman? His wife Helen (Jamie Leigh Curtis) and his teenage daughter are probable the only two people on earth who would buy that scenario.

Every day Harry Tasker (Schwarzenegger) kisses his family goodbye and pretends to go off to the concrete jungle to sell office equipment. But, he's really living a double life as a super spy. His days are filled with derring-do that even James Bond would be proud of. In fact, the beginning of the film with a tuxedoed Harry doing a mean tango with Tia Carrere while infiltrating a terrorist get-together, resembles James Bond at his most debonaire.

Harry's secret life is causing him some problems with his family because his job keeps him away from home so much. His daughter is beginning to turn into a delinquent and his wife is looking for a little excitement outside the home herself.

The story veers a little when Harry thinks his wife is having an affair and enlists the help of his friend and fellow spy (played by a very funny Tom Arnold) into trailing her. I wasn't sure where this plot was going, but when Helen joins her husband on one of his caper, things quickly pic up again.

The stunts and visual effects are unbelievable. Over $100 million was spent on this film, and you can see every penny of it up on the screen. Two Harrier jets shoot out a bridge with trucks carrying a nuclear bomb on it, a fight on a crane perched precariously at the top of a tall building and a chase through Washington D.C. on a motorcycle and horseback, are a few of the edge-of-your-seat, action-packed scenes.

Curtis' Helen is a mousey secretary, who, true to the old cliche, takes off her glasses, slicks back her hair, hikes up her dress and becomes a sexy femme fatale. Even when dangling from a speeding helicopter, she looks good. Curtis and Arnold are fun together and having the two team up in a sequel might be a good idea.

Schwarzenegger has quite a bit of dialogue her, and between gun blasts and exploding bombs, his playfulness and sense of humor comes through. Arnie should keep his dancing shoes polished, because director and co-writer James Cameron (The Terminator and T-2) has a hit on his hands. From beginning to end, True Lies is chock full of adventure, danger and all-out excitement.