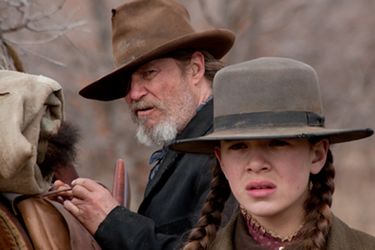 
Joel and Ethan Coen (A Serious Man) have put their stamp on an indelible 1969 western which earned iconic actor John Wayne his only Oscar as tough, alcoholic U.S. Marshall Reuben J. "Rooster" Cogburn.

These acclaimed writing and directing siblings (the former is married to actress Frances McDormand) have kept many colorful elements of True Grit intact from Charles Portis's rich and wry novel, perhaps toning down the wry part too much for some. And, less folksy than the original directed by Henry Hathaway fashioned as a star vehicle for Wayne.

Still, the story and characters, especially Cogburn (Jeff Bridges, less hammy than Wayne) and young teenage Mattie Ross (Hailee Steinfeld), resonate in something that has mainstream potential. Even if some of the drawling may not have enough clarity as such natural wordsmiths can present in portraying latter 19th Century regionally.

The premise revolves around Mattie's insistence for justice on the unforgiving culprit of a drifter in Tom Chaney (a deceptive Josh Brolin of Wall Street: Money Never Sleeps) of her dad's demise. She retains Rooster and an indignant, hesitant if self-effacing Texas Ranger La Beouf (rhymes with the chief) done in an unshowy, effective way by Matt Damon, reprising the Glen Campbell role."Retribution and punishment comes one way or another" in a quest for a reward by the two disparate riders sidled together.

Much of the what is less of a remake than a faithful adaptation of Portis has the unlikely trio traveling through untamed territory in the southwest given a pristine, if diminished romantic look by the helmers' exemplary lenser Roger Deakins. One that moves from the dusty to the chill of early winter.

An early scene that personifies the arguably homely Mattie's moxie and indefatigable nature is one with a horse-trader trying to recoup some financial stability. So, much of the earlygoing does utilize Portis's archaic, if formal approach through language, style and tone. The way Mattie and Rooster are first introduced through an outhouse is out of the ordinary with a taxing trial is on the way.

Though True Grit (working fairly well as a spry western character study) doesn't quite rise to the level of greatness of a recent example of the genre like Unforgiven, it has, like that winning Clint Eastwood film, much apprehension and character bonding even if its predictability perhaps hurts it dramatically. Though much younger than McDormand's Marge Gundersson in The Coen's Fargo and a little less so than Kim Darby in the original, a similar tenacity and pride are evident in the very engaging Steinfeld. She really has good rapport with the eye-patched Rooster done with dissolute and finally heroic qualities by Bridges (perhaps not so unlike his craggy, washed-up country singer in last year's Crazy Heart for which he won an Oscar and Golden-Globe). Some of the more humorous interludes feature Rooster and La Beouf who is also on the trail of Chaney after the murder of a Texas senator.

After "The Dude" in The Coen's The Big Lebowski, Bridges makes a seemingly larger-than-life figure credibly realistic as Rooster is aroused by the no-nonsense spirit of Mattie. Brolin's sly Chaney doesn't really appear until well into the film's second half as part of the outlaws under "Lucky" Ned Pepper (an unrecognizable, despicable Barry Pepper). A styled picture with a rugged source-flavored score by Carter Burwell intensifies action-wise in the latter going with solid tracking shots and scenes on a mountainside, in a meadow, and around a snake pit. Mattie seemingly is in good hands, even when La Beouf takes a blow or Rooster is trapped under his steed.

Often austere yet uncharacteristically more family friendly in part because of the reined-in nature of lingo and violence (a trim of a painful severing moment) amid oddball folks from the more straightforwardly solemn-thinking auteurs this time, an unsatirical cinematic demeanor is probably for the better. Before the voice-over epilogue which might sting a little, being in the presence of a dispassionate, independent-minded Mattie and an irascible Rooster is something that makes an elegiac, shorter yet measured "Grit" an inspired reworking that is often touching and true.