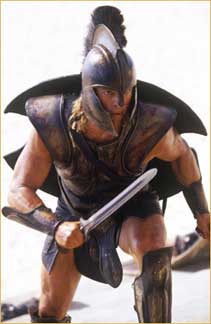 The talk about this version of Troy revolves far too often about Brad Pitt’s 40 year old body, it looks good, but if that’s the focus of the film something is missing.

I remember the 1955 version “Helen of Troy” as an over-the-top adventure which focused on the love affair between Paris and Helen. The battles dominated and Achilles (Pitt in this version) was the nasty warrior who was imposing and impossible to defeat until a Paris arrow pierced his heel and destroyed him.

The background from Homer’s “Iliad” tells the story of Helen (Diane Kruger) who is willingly taken from her husband King Menelaus (Brendan Gleeson) by a young handsome Paris (Orlando Bloom) who is a Prince of Troy. The Greeks lead by Menelaus’ brother Agamemnon (Brian Cox) head to Troy, located on the northeast coast of the Aegean Sea which is now part of Turkey, to recapture the young blond wife. We learn quickly that Helen is only an excuse for Agamemnon to attack and control Troy. The reason for the war is not the obvious one. Achilles based on his reputation as a magnificent warier is sought after to be part of the invasion though Agamemnon has disdain for the independent Greek.

By the time the Achilles heel and the Trojan Horse are in play we know this Wolfgang Petersen production is about Brad Pitt and not Troy. Pitt is effective as the brooding non conforming vicious hero who in this film can be gentle and sort-of fall in love. He also has a modern philosophy believing that publicity will make him immortal.

If Pitt’s Achilles is the focus the lovers take a back seat and Bloom’s Paris is reduced to a timid youth who must be represented in battle by his brother, Hector (Eric Bana) who has never supported the retaining of Helen. He would return her to Greece to avoid the war. But King Priam (Peter O’Toole) supports his playboy son which turns out to be a bad choice as is his decision to drag the Trojan Horse into the walled city.

Kruger a German model must have been chosen for her spectacular good looks because the script gives her very little to say.

While the production has some value and excitement and the CGI fill the screen with thousand of troops from each side we sometimes feel this is a video game with love making between to make it human. Very often it’s difficult to determine who is fighting who because the combatants tend to look alike when they clash.

Pitt, Bana and Cox stimulate with their performances but O’Toole who looks great appears lost in the role of the leader of Troy.

Troy at times overcomes is draggy dialogue and other limitations and brings us a modest view of those old fifties and sixties spectaculars, it has its moments just not enough.