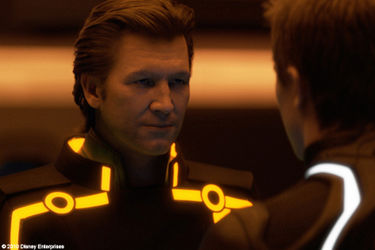 
This nearly three-decade (quasi) sequel relies heavily on the current trend in digital design and aesthetics, and shouldn't disappoint the Wii and XBox generation. Those, however, closer to their age when Tron came out when that technology was just getting going before VCRs were mass-produced will probably find it less spectacular with its visually retro pizzazz.

Tron: Legacy is ideally experienced in the IMAX 3D format with its glassy, glossy darker textures and with advanced theatrical sound systems to make pulsating electronically produced funk and progressive house music of Daft Punk to make for a translucent, captivating cyberworld.

The film by Joseph Kosinski with an architectural background from Columbia University stars the ubiquitous Jeff Bridges (see The Coen's True Grit), Garrett Hedlund, Olivia Wilde, and Bruce Boxleiter (the latter and former remembered for their tremulous partnership in the original, a unique combination of storytelling, widescreen live action, hand-drawn animation and computer generated imagery that was considered groundbreaking for its time).

An underwhelming storyline uses the vanishing of Bridges's Kevin Flynn for someone toiling in the virtual-world to eradicate a massive Master Control Program. Flynn's son, Sam (Hedlund coming up in Country Strong opposite Gwyneth Paltrow) is into Ducati motorbikes and is reluctantly drawn into his father's company of change Encom (read Enron) as a shareholder and gets a message from his dad's old associate Alan Bradley (Boxleitner) which thrusts him into the "antiquated" eponymous game. Something that has a certain "fast and furious" feel to it that Sam begins to engage like the cycling cops he likes to elude in a way with the filmmakers obviously influenced by hit sci-fi actioners like The Matrix.

The shift into his father's domain or what is referenced later through "radical biodigital jazz" cuts heavily into the landscape in the course of many years there've been amazing breakthroughs in design, vehicles and weaponry, but you can't forget those lightcycles and laser (disc) Frisbees. It's more than a fight for survival as he encounters his older (Zen-like) father (who calls him "Man"), needing sexy, fearless Quorra (Wilde of The Next Three Days) to bring down Flynn's doppelganger in Clu (a younger Bridges) and get dad home in a race-against-time scenario.

Perhaps like last year's more emotionally resonant but narratively unspectacular Avatar the incredible visual recreation through modern means can only diffuse the strain so much from a familiar father/son conflict. Here's another case where it's hard for the actors, maybe apart from a multi-tasking Bridges, amusing as the father, blandly ruthless as the megalomaniacal Clu. There's not enough of a dynamic for Kevin, Sam and a warrior-like Quorra for the accented characterizations to rise above what becomes more than repetitive and banal than its latter, more lithe thespians.

Fanboys who use the likes of Nintendo DS will revel in the stream of cool items and images including an awesome aircraft with a gun garret. Besides Bridges who obviously is used most in the highly prioritizing performance-capture process, it is Michael Sheen as a cocky Clu glam-rock-like minion of a club owner who makes the most of his scenes, but is more of a pawn for the filmmakers to connect with a parallel alternate reality. Still, the legacy of a new Tron, an overlong occasionally wondrous sweeping blacked-out mythical adventure might be the continuing striking evolution of special effects in cinema at the expense of story and direction.