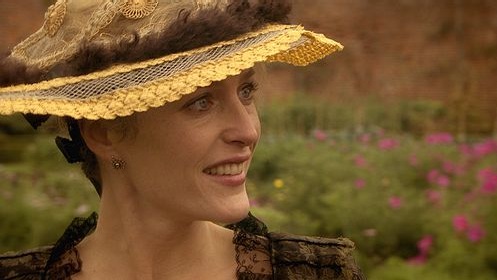 
This eccentric, bawdy adaptation draws playfully from a well-known 18th-century comic novel by Laurence Sterne, "The Life and Opinions of Tristam Shandy, Gentlemen."

Tristan Shandy: A Cock and Bull Story may appear to be an odd piece of period filmmaking from Michael Winterbottom (24 Hour Party People, In This World). But, it is irreverently funny in skewering the film medium, and British thespian Steve Coogan has the talent to make the humor work throughout, even if this rollicking tale will appeal most to those from the U.K, especially those reading the gossip rags.

In this rambling take on a hard-to-adapt novel Coogan is nicely matched with Rob Brydon with Winterbottom using the autobiographical speaker from the novel to go on narrative treks or digressions. On the screen it seems to come across as a movie within a movie about the making of a movie.

The novel probably gets truncated as Coogan's Tristam Shandy wants to relate his life's story. Yet, this is hard with plenty of distractions and interruptions, a fictional roundelay that feels like credible, risible antics. Coogan also plays his father Walter and Brydon is spry as Uncle Toby, a wounded vet.

While Coogan and Brydon turn out to be a British version with some of the zesty snap of Dean Martin and Jerry Lewis, Winterbottom with his screenwriter Martin Hardy, does something that Terry Gilliam would smile at, from a fascination with the motion-picture industry that transcends time.

Fine support comes from the film's uptight director, acted by Jeremy Northam, as well as from Ian Hart, as the ignored screenwriter. Gillian Anderson, not often seen in films these days, shines as herself and "Widow Wadman". And, the pretty Kelly Macdonald (Nanny McPhee) fits in very well as Coogan's "wife." The protean Winterbottom definitely has fun on the set here that deftly deals with scandal and insecurities in a way that shows how hapless 21st-century filmmaking can still be entertaining.