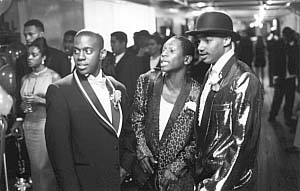 Trippin' has some fine moments, just not enough.

Gregory comes from a solid intact family including a little brother who gets in the way, a mother and father who guide him and a grandfather (Bill Henderson) who has the best lines in the film.  They all care about him and urge him along sharing his disappointment and joy as they open those college letters of acceptance and rejection.  His problem with girls however is a little more complex, he has affection and respect for Cinny Hawkins (Maia Campbell) the best looking girl in the senior class.  But advice which comes easily from his friends played by Donald Adeosun Faison and Guy Torry cause problems.

The story looks a great deal like the 1972 film Portnoy's Complaint from the novel by Philip Roth.  Gregory uses a warm apple pie, and Portnoy used a steak to create the same sensation.  Gregory's parents are far more understanding and Trippin' has little depth.

It is rated R for language and brief nudity.