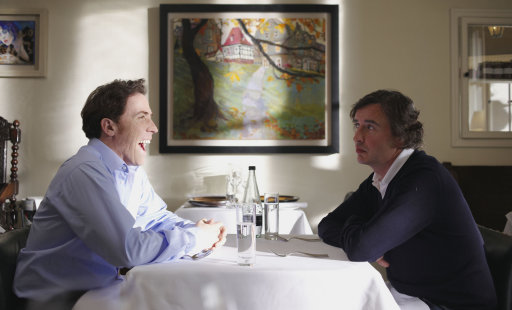 
This occasionally uproarious U.K.-set mockumentary has actor Steve Coogan (Hamlet 2) in frisky form again under the direction of the versatile Michael Winterbottom (A Mighty Heart).

A little protracted, episodic, and suitably named The Trip features Coogan and chum Rob Brydon out on the country's Lake District and Yorkshire Dales. Patterned after themselves, Coogan's Observer reporter, a wannabe thespian looking to "hit it big in America," gets his insecure, low-key actor of a friend out to accompany him in critiquing and ranking a half-dozen of the finest eateries in the aforementioned region.

Of course, Brydon wasn't Coogan's first choice as Steve's moody girlfriend Mischa (Margo Stilley) backed out at the last minute and everyone else had too much going on. So, the narrative, cobbled down from a BBC television series, is apportioned from their meals at the assigned restaurants with some literary detours.

The primary pleasure provided here in what may seem like a sequel to the more surreal Tristam Shandy: A Cock and Bull Story is the interplay between Coogan and Brydon. When they're on-screen together which is often the case with plenty of topics to cover as serious questions are raised amid all the times they manage to get on each other's nerves an improvisational impishness fuels a lengthy ride through the English countryside.

The Trip perhaps works best in its short, acerbic doses with a text that feels inspired by the ennui that our dueling duo has endured on their divergent paths to fame. Arguably, their manner of a variety of impersonations from Sean Connery and Woody Allen to, most notably, Michael Caine, may linger the most afterwards as Rob gets kinky on the phone with his wife (Rebecca Johnson) and Steve finds some carnal pleasure along the way. Though Winterbottom's direction is suited to his playful performers and freeform schematic, the result just probably isn't enough to compete in a theatrical marketplace, preferable as a VOD or other ancillary option.