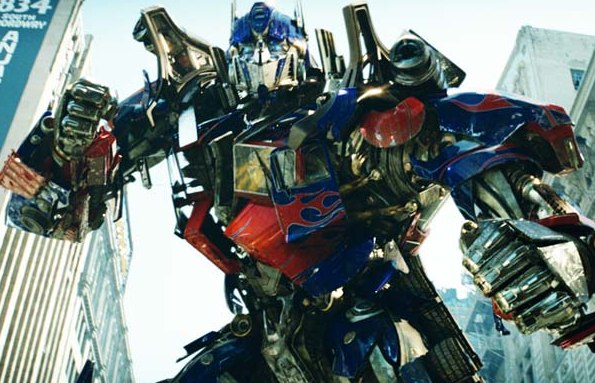 
Summer means action movies, and between this and Bruce Willis' new Die Hard film, action junkies should get their fill.

Based on Hasbro's robotic toys of the 1980's, Director Michael Bay packs his machines gone amok actioner with plenty of shape-shifting fun.

The story has both good and bad transformers coming to Earth from outer space in search of a powerful cube that can absorb all energy and in doing so control the world.

The evil robots chase the cube and their good counter-parts lead by Bumblebee (voiced by Mark Ryan) work with his leader Optimus Prime to defeat them. Each set of robots can transform from jets, helicopters and various vehicles to fully erect human standing positions. Both sides are ready to do battle and director Michel Bay gives us plenty of battle scenes to watch.

Mixing live actors with the alien effects gives less of a cartoon feel and pumps personality into the script. Shia LaBeouf's Sam Witwicky is a typical teenager who wants his dad to buy him a car to get around but mostly to impress Mikaela (Megan Fox) the hottest girl at school. Dad comes through with a rusty 1976 yellow Camaro that has a mind of it's own. Turns out the car is a bot called Bumblebee and eventually turns into the not-yet-released new Camaro model.

Sam is dragged into helping Optimus save the day along with the United States military commanded by Secretary of Defense (Jon Voight) and U.S. Special Forces member (Josh Duhamel).

Sam provides plenty of humor as a charming, quiet teen whether he's being chased by Magatron, dangling from roof tops, trying to romance a girl or attempting to keep his parents from knowing what he's up to. He's a high energy kid who is up to the job.

Transformers is jam packed with action excitement and some great effects and has just the right amount of humorous personalities thrown in to make it a great day at the flicks.