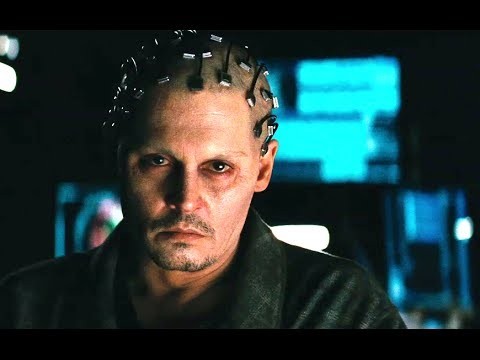 
Johnny Depp has had his share of flops in the last five years, including last year's The Lone Ranger and The Tourist which featured Angelina Jolie and a bevy of lovely locations.

You can add Transcendence (that many will unfortunately pay to see on IMAX screens) to this small list (which includes a few more if you leave out Rango and his last Capt. Jack Sparrow incarnation), a presumably slick, lushly produced insightful sci-fi thriller that for some may harken back to pictures a couple of decades ago like Virtuosity and The Lawnmower Man.

It collapses under the weight of a premise involving the dangers of technology and all the complex talk surrounding what is brainy yet ultimately silly. Thus, the disconnect between the star with his head shaved in some scenes, lenser turned helmer Wally Pfister, producer Christopher Nolan and the story which is anticlimactic and foreshadowed from its flashback and narration by Paul Bettany's buddy, fellow scientist Max becomes clear not too long into the proceedings.

Max is an acolyte of Dr. Will Caster (a rather lifeless, perhaps miscast Depp), artificial intelligence expert, who operates out of the Berkeley area and seemingly has a wonderful life with scientist wife Evelyn (Rebecca Hall). Their backyard has a 'technology-free' zone.

Pfister's usual craftsmanship is lost in his debut behind the camera in a narrative that feels more recycled than fresh or mentally invigorating (and worthy of multiple viewings) like Nolan's Inception and The Dark Knight"where his technical savvy enhanced the total viewing experience.

Suffice to say, without making the narrative sound better than it is, Caster has a 'transformation' through his supercomputer PINN and the insurgent group RIFT led by Bree (Kate Mara) that puts Evelyn and Max in disparate, yet precarious situations. It doesn't help that Evelyn has to look at computer monitors which makes it hard for Hall, a talented British actress, if you've seen Vicky Cristina Barcelona or The Town to name two, to emote to what isn't to her real flesh and blood. Max and Bree get to spend a lot of time together as the feds enter the picture with the usually reliable Cilian Murphy (also of "Inception") not given the chance.

The promise of ideas of the advancement of the mind and artificial intelligence may lure some into this fare for a while before the CGI kicks in during the latter sections where Transcendence descends into hoary, cliched experience where the action isn't meaningful or has any flair to it. Even Morgan Freeman's cynical scientist lending momentary sagacity feels like an afterthought. Using Depp in what could have been  vibrant, provocative cinema across the digital divide is an uninviting, very unspectacular upload.