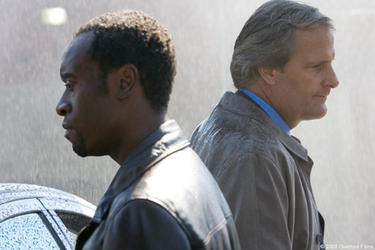 
Traitor has an explosive beginning - this deeply plotted movie starts early with the hard lessons and painful emotions felt by a young boy who witnesses a startling event that shapes his adult life. You somehow feel sympathy for this man who is seemingly a fanatical religious follower participating in terrorists activities. We find out soon enough that he is torn between his devout beliefs and his responsibility for the job he is doing for a greater outcome than we know.

Don Cheadle shows amazing strength as the title character, Samir Horn, he is believable and watchable, and at the end hopeful in his actions that define the outcome of this film. He portrays a man struggling to eliminate those forces that have damaged his fabric of life, seemingly in an adverse way, using his training and knowledge to aide those perpetrating terrorists acts. His acting, the way he walks and talks, carries himself and interacts with the other actors in the film is outstanding. Even when the forces around him start to spin out of control, he is just mesmerizing to watch.

Guy Pearce is forceful as the FBI agent in charge of the investigation of Samir’s activities; his interactions with the title character are strong and straightforward. Equally strong performances from Jeff Daniels the other actors in the film make this movie entertaining and thought-provoking. Even as the movie builds and you begin to understand the direction, the plot twist is unexpected and satisfying - you understand the intricately woven plot and the inevitable end of Samir’s acts is revealed. Just keep in mind the title of the film.

This is an excellent movie to watch, it is thought provoking and deep, the action and violence is somehow acceptable to the understanding of what this movie is giving. The sensitivity to the subjects of today is very well done. Yes, buy a box of popcorn; you will probably have some left over because you will be watching until the very last frame and you will have forgotten to finish your snack.