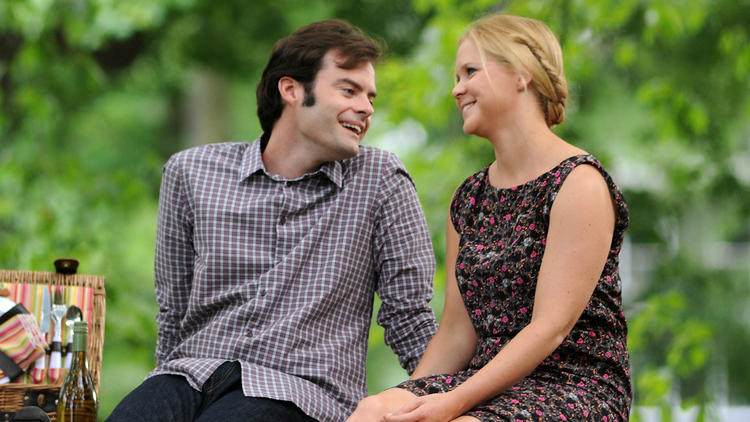 
Trainwreck is a train wreck.

Director Judd Apatow packs the film with cameos Mathew Broderick, Marv Albert and Chris Evert as a few but the best is Lebron James who is at the heart of the film and carries the comedy better than anyone. He inserts Amy Schumer into the skin of a screwed up young woman who deals with her inability to deal with by sleeping with different strangers each night and quickly dismissing them or running out of their place quickly after satisfaction is complete.  Some may say that just what men do and it's time for woman to have equal irresponsibility.

Schumer's Amy is a drunk who flirts on the edge of life while writing for a newsmagazine headed by Tida Swinton the standard non caring boss who just wants results.  The script blames her attitude and destructive life on her father (Colin Quinn) who believed in traveling around when it came to love.  Amy's problem is that her sister Brie Larson) who got all the save vibes from dad is married and about to have a child.  She is balanced, just the opposite of Amy.

The film may be attractive to women who cheer Amy on hoping she can grow and gain confidence, but nothing in the film gives us hope for that.

Along comes Aaron (Bill Hader) a very pleasant young sports doctor who begins to care for her as she interviews him for what she hopes will be a front page story for the magazine. Some one should have been sounding a warning to Aaron, get the hell out while you can.  The story line revolves around what we are suppose to believe that she doesn't want a second date.  Who would want to ask her for another evening.  She has evenings with a number of guys some who get credit and others who do not.  John Cena is the most prominent as he shows off his chiseled  gym built body.

Dr. Aaron is a good catch as a sports doctor to big stars he makes great money and has a solid future ahead of him.  Why would he be interested in the puking Amy, who is far from drop dead gorgeous.  She is probably the one who after year of marriage will have destroyed the happiness of her husband or he will have wisely headed out the door. But the script attempts to convince us that in the last five minutes of the film Amy becomes cheerleader style and has a 180 degree change in her attitude. NOT!

Director Apatow appears committed to strange couplings for his comedies, here it's the balanced doctor with the drab unhappy woman and in Knocked Up he attempted to convince us that  Katherine Heigl would fall for Seth Rogen. That probably would not happen.  Perhaps he should pair Schumer with Seth Rogen in his next attempt, that might work as a comedy.

Trainwreck falls off the track quickly.