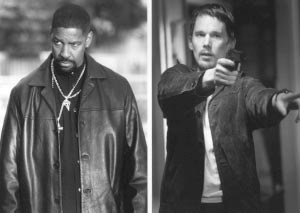 Also staring Ethan Hawke as the rookie to the undercover ranks, Jake Hoyt, who soon discovers that appearances are not always what they appear to be.  Training Day delivers a gritty and heart wrenching story.

To cap the story line, Harris is the street wise commander of an elite unit of undercover police officers.  Needing to find a way out of a jam, Harris capitalizes on an opportunity when Hoyt, in an ambitious move to make detective, joins his group.  Having an indiscretion that needed to be corrected, Harris plays this rookie while never tipping his hand.  You will find yourself buying Harris as a good cop trying to make a young inexperienced cop street ready in a short period of time.  The character portrayed by Washington is charismatic and believable to the point where we are never sure where he is going or why he is doing anything - a perfect scoundrel.

Hawke's character of Hoyt is one of a good cop trying to make a difference while making a good life and a safe life for his wife and child.  It is this ambition and the reputation of his new leader that allows him to be played in such a grand fashion.  There is a certain innocence in the Hoyt character that draws you to him and makes Washington an even better villain.

The culmination of the film is the expected conflict between good and evil: Hoyt vs. Harris.  This finale is the weakest point of the film and quite honestly I expected better from director Anthony Fuqua.  Though a bit over the top, we do get our expected pay off and good ultimately wins out over evil.

The strong performances by both Washington and Hawke make this a very good film and the feel of the streets one gets is a tribute to director Fuqua as well as writer David Ayer.  Do not expect great amounts of blood or even action.  This is a thinking person's film, deliberate in its speed and true to its characters while delivering great action and suspense.