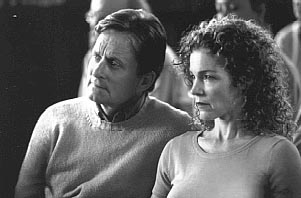 Michael Douglas plays a federal judge who has been nominated by the Precedent to be the U.S. drug czar.  While he is busy meeting with new associates and his predecessor (James Brolin), his own sixteen year old daughter (Erika Christensen) is introduce to cocaine by a boyfriend and quickly falls into addiction.

Catherine Zeta-Jones plays the wife of a wealthy businessman who is arrested for running a major drug operation.  Don Cheadle and Luis Giuzman are California DEA agents on the case of dealer (Miguel Ferrer) and Benecio Del Toro intensely and convincingly plays a committed honest cop in Tijuana, Mexico.

We get to see each facet of the drug trade from the user and the pusher to the middleman and the cartels, including the overworked and underpaid policemen who are enticed by huge drug money.

The large cast has stand outs; Douglas, Zeta-Jones, Christensen and Del Toro's performances are truly powerful although every role is meaningful.

When the action changes to Mexico, the film has a yellow, gritty look, almost like films produced in the 1940's.  Filmed in a semi-documentary style, switching from storyline to storyline, Soderbergh masterfully connects them seamlessly.

The desperate lives of these characters are laid open for inspection with all their imperfections and flaws, but the ultimate message of the film is that the war on drugs is not working.  No matter how many pushers and addicts are arrested, how many millions of pounds of drugs are confiscated, how many billions of dollars are spent on the problem, illegal drugs will be with us as long as the enormous profits remain.