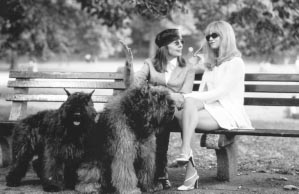 In Town & Country Warren Beatty is in a far more precarious position than his beleaguered, bleary eyed senator in Bulworth.  He is seen falling down more than once and his hard-working architect is believed by Japanese clients to be a handyman.

Assembling a cast with Beatty that includes Diane Keaton, Garry Shandling, and Goldie Hawn provides appeal for those wanting to escape cinematic attempts that cater to adrenaline rushes or teen angst.  But expensive rewrites and re-shooting makes for an odd, troubling comedy that develops some of the personalities of its strange characters who hopefully aren't neighbors of yours.

Beatty's Porter Stoddard is first seen sitting up in bed as the character looks to be in a daze of confusion as the camera peers in from behind a nude cellist played with sunny capriciousness by Nastassia Kinski.  Beatty's voice-over indicates that he has lost continuity and commitment in his life which seems to be good until best friend Gord (Shandling) sneaks off with a red-head behind the back of wife Mona (Hawn).

This movie proves that men will be boys even after twenty five happily married years and Peter Chelsom's jaunty, muted direction doesn't fare well with a convoluted script of misunderstandings that arise from Porter's wayward whims.  Here is another example of high caliber stars unable to do much to a chaotic adult film which could have had some of the prescient qualities of The First Wives' Club.

Throughout this long-delayed movie that shifts from Paris to New York to Mississippi and back to New York's plush suburbs, the characters don't really listen very much to what's being said.  Until a climatic designer evening engagement no one knows Gord's true feelings even when he starts to confide with Porter as they retreat to a Last Chance Ranch in Sun Valley.

For all of its unfocused plotting that looks for sanity, Town & Country manufactures off-beat movements that provoke unavoidable amusement.  When Ellie holds a knife in hand while enjoying a sandwich describing a movie she saw, or the architect goofing off as a polar bear at a Halloween party greeting his son (Josh Hartnett), Town & Country has moments of being like Woody Allen's collaborations with Keaton but it's hard to care about what Porter is left to deal with.

Included in this odd odyssey of philandering is Jenna Elfman who knows much about fly fishing and looks good as Marilyn Monroe and Andie McDowell who's attracted to the architect like one of Beatty's Shampoo ladies.

But the winding, overstuffed story and characters don't deserve much sympathy as mindless impulse primes this ill-fated contemporary Bob Carol Ted and Alice with an debilitating impact that stains more than Keaton's white suit and almost has her Reds director and bewildered co-star out of breath.