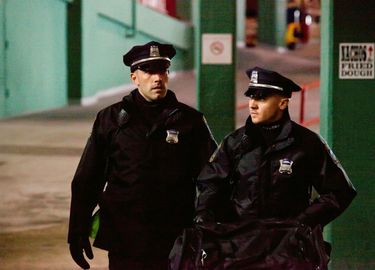 
Ben Affleck works admirably, if a little too ambitiously from Chuck Hogan's novel Prince of Thieves in this gritty, yet increasingly routine crime drama. Something well-edited and smartly paced with more backbone than the flashy, if forgettable Takers.

The Town (which Affleck co-wrote) stars Affleck, Jeremy Renner, Rebecca Hall, and Jon Hamm and builds power from its Charlestown, Massachusetts Boston neighborhood from which it's based. The details of this crime drama and its source deals with Charlestown's tradition of familial armored car and bank robbers cyclical as it houses a maximum-security prison. This revolving enclave almost makes a contemporary daily microcosm of the local Bunker Hill site with the endless internal and urban battle of small units that keeps law enforcement on its heels.

After his intriguing, thoughtful Gone Baby Gone, the director realizes the effect of something that is hard to leave, something touched on in a strand of Michael Mann's more sweeping, stylish Heat. It's hard for Affleck's ruthless leader in Doug MacRay to change his life from a robber, though he's not of the same ilk as those he's been with, getting what they want without any backlash.

One of Doug's earlier heists had a hostage who was released - Hall's bank manager Claire nabbed by volatile tight-lighted right-hand man and "brother" Jem (Renner, so good in The Hurt Locker). As she lives nearby, Doug tries to keep a frayed Jem under control and gets to know the traumatized bank manager first at a laundromat. She doesn't know this is a chance encounter, as the vulnerable attractive woman finds solace in the arms of an engaging stranger.

The Town tautly gravitates before going a little over-the-top (even more so than some who thought the same of The Departed). It uses the stark, sharp specifics of the milieu to access someone like Doug and his arc based on emotional constipation and personal redemption to make a life-changing fateful choice. Affleck does a nice job from the cast as there is palatable banter between Doug and Jem, a fine temperamental Renner. The struggle to leave the past and sins of the previous generation is done to compelling effect, for a while, as the use of the romance between Doug and Claire, an honorable Hall of Frost/Nixon starts to distill an oddly compelling policier.

Boston's Fenway Park is the chief setting for the climactic last act as Doug knows getting out of the town might put Claire in harm's way while Jem sensing some mistrust. Maybe in trusting the source material the rendering of the climax and overall resolution just doesn't deep as passionately and poignantly even with much authenticity to character interaction and turmoil.

The trade of robbing may, for some, be a little startling, especially for those who do more than have occasional business in Beantown. But, Affleck continues to show an adroit acumen behind the camera as he reinvents himself in front of it and knows how to coax effective supporting work. It is evident from Blake Lively as Jem's drug-dealing sister Krista, Hamm as the dogged FBI agent, and especially Chris Cooper as Doug's incarcerated dad in a film with much psychology from such a small geographic are which some of its themes resonate with memorable, penetrating pictures like Copland and The Departed.