To Rome with Love 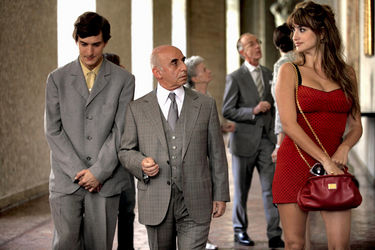 
The fertile imagination of Woody Allen has the writer/director and this time actor (his first appearance since Scoop) in the Eternal City, but to more diminishing returns than his very well-received Midnight In Paris which won him another Oscar for Best Original Screenplay.

His new comedic omnibus To Rome With Love, of course, is well cast with the likes of Ellen Page, Jesse Eisenberg, Alec Baldwin, Judy Davis and Penelope Cruz, but his latest cultivation feels more of a knockoff of past successes or even disappointments like Celebrity. With hardly a shoddy production if one considers how its bathed in a golden hue.

Whereas Owen Wilson turned out to be quite impressive as the Allen surrogate there are two in a way (at different stages of his life) besides having himself as a semi-retired U.S. opera helmer trying to get his professional mojo back by singing undertaker Giancarlo (noted tenor Fabio Armiliato). One is Jack (Eisenberg) and the other is John (Baldwin), a renowned architect vacationing in Rome where he had once lived. When John sees Jack in his old stomping grounds it's like a flashback, especially when he starts to become enamored with Monica (Page), the coquettish pal of his girlfriend Sally (Greta Gerwig of Lola Versus).

Allen's Jerry and grouchy wife Phyllis (Davis) fly to Rome to meet with their daughter Hayley (Alison Pill from Midnight in Paris) and her Italian fiancee, Michelangelo (Flavio Parenti). His father is the aforementioned Giancarlo who has the knack to belt out wondrous arias in the shower, so Jerry sees it as a chance for talented mortician to embark on a new career and for him to salvage his.

Other parts of this occasionally diverting, if too drawn out cinematic compendium include Roberto Benigni (an Oscar-winner for Life is Beautiful) as middle-class Italian Leopoldo Pisanello who becomes an overnight sensation hounded by the media and beginning to understand the personal cost for what comes along for achieving fame. There's also a little comedy and happenstance through the rustic Antonio (Alessandro Tiberi) trying to rise up the latter of success by showing off his gorgeous new misses Milly (Alessandra Mastronardi) to his relatives. She happens to be paired up with a venerable film actor Luca Salta (Antonio Albanese) and Antonio with the mysterious stranger Anna (Cruz, who had better material to work with in Allen's Vicky Cristina Barcelona).

Allen has directed opera, specifically one of Puccini's in Los Angeles a few years ago, so it seems a relatively viable fit for a role at this time for the iconic aging auteur. Yet, it doesn't feel like the project and material gestated in ways without the kind of creativity and cohesion (notably time without the plot's episodes) to establish the kind of charm, wit and encouraging gratification felt in a picture like The Best Exotic Marigold Hotel (where there may be some similarities with when it comes to youthful longing and romance, as well as unexpected transformations).

Here and there (for the director's ardent admirers) there may be interludes to luxuriate in, yet there isn't the value or more serious purpose in a project which also has affection for Italian filmmakers. You would think with actors like Baldwin, Cruz, and Davis, among others that there would be more substance and wit, but in To Rome With Love where some will marvel at the sights there just isn't the motivation and nourishment with cast and crew to make this an artful anthology to talk about.