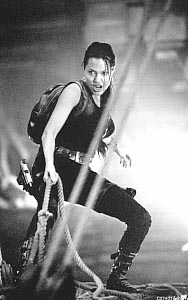 Based on a video game character, Angelina Jolie plays Lady Lara Croft with just the right mixture of toughness and sexy confidence.

Finally, a smart and beautiful female action figure who can hold her own against the big guys.

Lara lives in an 83 room mansion with a proper butler and a nerdy computer whiz who dreams up robots that attack Lara when she least expects it.

Lara's estate is more laboratory/gym than home.  The cavernous halls are a great place to hang from the ceiling from bungee cords to await evil intruders that arrive through skylights, or to practice her double-fisted shooting techniques on her assistant's home-made mechanical monsters.

The convoluted plot revolves around continuing her missing father's (played by real life dad, Jon Voight) mission.  Hidden in an old clock lies the clues to the whereabouts of two pieces of a stone triangle that are stashed in different parts of the world.

Whoever finds the two pieces and fits them together, will receive powers that can turn back time, so Lara has to prevent the bad guys from getting their hands on them.

The quest brings Lara and her evil opposition to Venice, Italy, a city built on a frozen lake and a huge tomb protected by stone monkeys.  The tomb covered with vine ropes, crumbling rock and looking like something out of Raiders of the Lost Ark, is awesome.  Each set is creative and another opportunity for a terrific fight scene laden with clever special effects.

Lara has to fight off enormous stone monkeys that come alive, scale a giant mock up of the planets in the solar system and defiant gears that are ready to crush anyone who is looking for missing pieces from the puzzle, and control a pack of dogs while she sleds behind them with her long coat and hair flowing.

Lara is a beauty with a penchant for black shorts with hand guns strapped to her thighs, tight little T-shirts and long black hair slicked back into a braid.  She kick boxes, rides a neat motorcycle, can out-shoot most of her adversaries, is acrobatically nimble and can throw a mean knife.

Jolie makes a super Lara Croft.  She's believably athletic (performing most of her own stunts), has a half-smile that tells you she takes her role seriously but is having fun and yes, she's got the body to carry it all off.

With an opening weekend of $48 million, looks like a sequel is in Jolie's future.