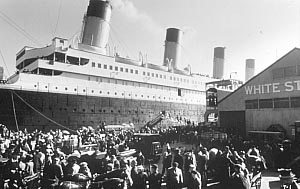 James Cameron's Titanic is a masterpiece of film making.  It is visually spectacular and rivals An Affair to Remember as a lasting love story.

At 101, Rose Calvert (Gloria Stuart) is discovered by Brok Lovett (Bill Paxton) to be a surviving passenger from the April 1912 fatal voyage of the Titanic.  Her story, told in flashbacks, is the center of the film.  At 17, Rose (Kate Winslet) was a first class passenger and she remembers the smell of fresh paint, the never used china and the never been slept in sheets.  The ship was called the ship of dreams and to her it really was.  Engaged to Cal Hockley (Billy Zane), she is being molded by her mother (Frances Fisher) to take her place in society and save her financially destitute family.  Jack Dawson (Leonardo DiCaprio) wins a third class ticket on the great ship in a poker game just minutes before the ship sails.  In Rose's most desperate hour, Jack literally comes to her rescue.  Their connection reveals all the undercurrents of class, greed and foolishness which allow the Titanic to strike an iceberg, sink and kill over 1,200 people.

The disaster is only the backdrop for the romance, because Cameron takes the time to develop the characters.  When the spectacular sinking occurs, it's not just special effects, it is the end of many interesting people who have been introduced and exposed during the first part of the film.

Rose and Jack sneak into the cargo hold one evening when they both know it is no longer possible to restrain themselves from making love.   In the back seat of a new car they are lost in love, steaming up the windows and creating a violent reaction from her fiancé.

Earlier in the trip, Jack draws a picture of Rose wearing only a spectacular necklace with a priceless diamond hanging from it.  While her image is being drawn by Jack, Rose talks to him as the camera moves closer and closer to her face, ending with an image of just her eye.  When the camera immediately, but slowly, retreats from the eye, the voice changes and the face of Rose today is exposed continuing her dialogue.  It is the same eye, the same beauty and the same passion contained in a very old woman's memories. It is that carefully conceived work that polishes the edges of Titanic and makes every scene compelling.

Cameron also shows the Titanic as a small dot of light on the Atlantic Ocean in scenes framed from high above.  It is the largest man made object ever to sail up to 1921.  Considered unsinkable the owners and captain use that false security in making critical mistakes which cause the disaster.

Zane's part is bit too much.  He is dominant, jealous, violent, possessive and without any moral fiber.  He has no redeeming qualities.  Molly Brown (Kathy Bates) is newly-rich and the older rich ladies, like Rose's mother, avoid her.  She has all the quick, snappy, defining lines which distinguish reality from the stuffy, upper class illusions.  Bernard Hill as Captain E.J. Smith shows the pain of his mistake with his eyes.  After a full, successful career, this disaster will define his life.  Jonathan Hide is the company representative who urges the captain to travel faster than is safe.  He sneaks on a boat with the women to save himself.  Victor Garber is Thomas Andrews, the architect who knows he must go down with the ship and carries the pain of guilt in each of his actions as the ship begins to skink.  David Warner is the strong man for Rose's fiancé.  He acts like an underworld enforcer when he leaves Jack chained to pipes as the ship begins to skink.

The characters blend laughing, gossiping, plotting, loving, hoping, dreaming and bright dialogue as they head toward the deadly iceberg, but the romance dominates the film.  Rose and Jack's story as told by the elderly Rose is beautiful and consummate to the end of the film.  This will stay in our minds as one of the best classic romance films ever made.

Not to forget the special effects and the spectacular sinking scene.  Early on, an animated video describes exactly what will happen with each section of the ship as it fills with water, breaks in pieces, bobs back up and then finally sinks into the cold dark North Atlantic.  Special effects in this production are as they should be, the background to human emotions and dreams, not the central focus.

This is a spectacular, brilliant film.  It may be the best of the year.