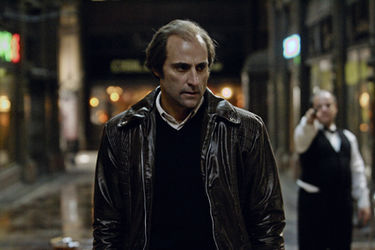 (Tomas Alfredson Let The Right One In) switches with ease from the horror genre as a masterful cinematic cryptographer that may even weigh down a more discerning, patient onlooker.

A sensible script, collaborated on by John LeCarre (from his novel) and Peter Vaughn (The Debt) turns out to be a probing, twisting procedural after a British agent (Strong's Jim Prideaux) is downed in the U.S.S.R.

In this audacious potboiler where everyone important to the outcome isn't necessarily in frame, sepia-hued smoky designing has a very complement feel for the times abetted by Hoyte Van Hoytema's striking lensing. One gets glimpses of men (and few women with Kathy Burke as a tough-talking colleague) with some interesting subtext and flashback (especially with Hardy).

Strong resonates particularly with a despondent lad, while Firth evinces more flamboyant, acerbic edge than in The King's Speech. Cumberbatch turns out to be more of a linchpin in what plays out like an edgy chess match that makes the most out of its capacity for stillness as Peter would be right at home in rooting out evil for Agatha Christie. Oldman has a subtle knack for revealing bits and pieces about Smiley without hamming it up as he often does in Hollywood productions.

High caliber production values include an evocative, quietly churning score by Alberto Iglesias as this cinematic recipe with the right amount of dashes and pinches makes for a riveting, thorny adaptation of LeCarre's take when Cold War paranoia was on a rampage. One, right down to exquisite detailing, that is elevated by confident filmmaking rewarded by an able-minded, unshowy cast always respectful to an alert audience.