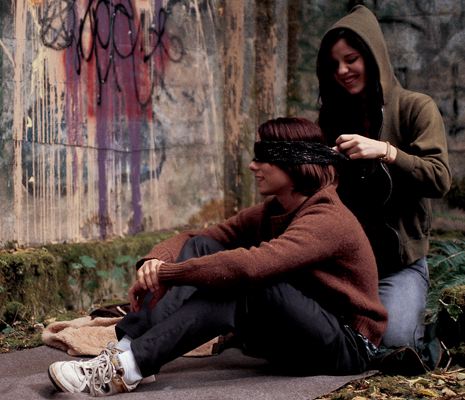 
Mike Mills' Thumbsucker takes an oral fixation and makes something introspective with much humanity. Lou Pucci plays the titular 17-year-old Justin Cobb with a certain understated flair that works in this off-center, meditative fare.

It's clear that Justin has his share of insecurities and deals with it by an act that he has been doing for nearly all of his life. There are loving, helpful people around him like his R.N. mother Audrey (Tilda Swinton of Broken Flowers) and a Zen-like dentist, effectively played by Keanu Reeves (Constantine). Also, the witty Vince Vaughn doesn't mind being cool in a supporting role as an upfront debate coach. Kelli Garner (The Aviator) even has some telling moments as a classmate Justin really cares about.

Set in Oregon, the screenplay by Mills has Justin wanting to go to NYU, but there isn't a lot of hope as a school psychologist prescribes the ADHD-afflicted teen with medication. He'll finish reading the daunting "Moby Dick" and begin to shine in the debate club. There's a connection within that manifests itself from the thumbsucking that starts to ebb the personality of Justin.

While not aiming for originality as a coming-of-age picture, there is subtle humor within everything that Justin must cope with, from being not understanding to being depressed. Swinton has her own obsessions and desires to contend with that obviously affected Justin's upbring. Benjamin Bratt (The Great Raid) appears as a movie star who has entered the rehab center where Audrey works. The comedy and drama come together in later scenes with Justin's younger brother Joel (Chase Offerle) and Reeves realizing how to "live without an answer."

Thumbsucker can often seem peculiar, but has a sincerity from the performances and production values, especially the music, with some spirited youthful vocals. It stretches into something natural and therapeutic from some broad circumstances as Mills and an earnest Pucci sucks something affecting from the philosophical.