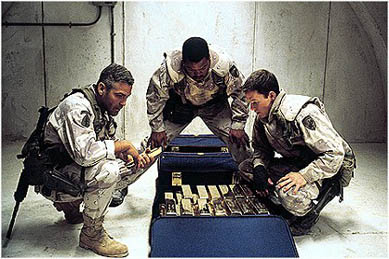 So often we walk into a movie theater expecting to be entertained and come away with much more fulfilling experience.  Three Kings is just that.

The story begins with the discovery of a map showing the whereabouts of a bunker holding Kuwaiti gold stolen by the force of Iraq and Hussein.  The four major characters of Clooney, Wahlberg, Ice Cube and Jones decide to keep this discovery to themselves and claim the gold for their own.  The idea is that the Republican Guard of Iraq will not interfere as they will be busy with Iragi resistance forces who the U.S. government have encouraged.

Here in lies the second plot of the movie.  While attempting to abscond with the gold, our heroes see the results of their victory over Iraq.  They see a village being starved for their part in the revolt, prisoners tortured and families being humiliated and used by the Iraqi soldiers.  There are some pretty graphic scenes of death, torture and torment which serve to deliver us to the third plot line...conscience.

During the attempt to acquire the stolen gold, this unusual band of scoundrels can not stand by and see these innocent people destroyed due to a change of heart in American policy.  There is strong drama and a certain coming of age for Clooney as an actor.  Not only is he capable of being the strong hero type, but also a leader and a compassionate human being.

There are some light scenes included here, but when you leave the theater, you will be reassessing how television can be used to mislead, how basic human nature for both good and bad exist in all of us and how easy it is to claim victory in the eyes of those who have only been shown what a government wanted them to see.  I think the most important statement for the movie is that there is never a victor in war and it is the civilians who ultimately pay the price either in suffering or death.

This is really a movie to see.  It has a great audio track, good acting and an eye opening view of how wars are fought in the modern world.