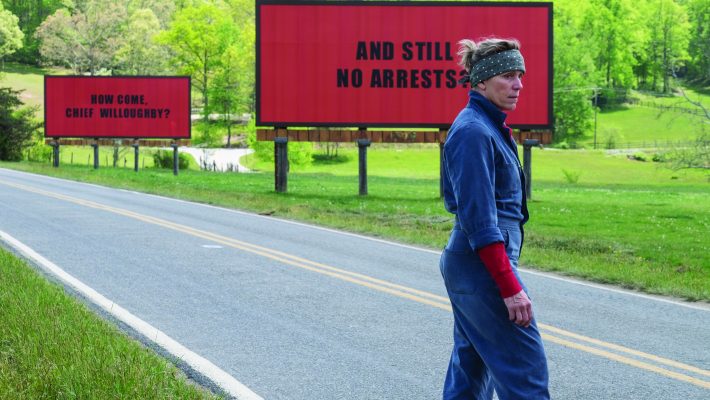 
This new darkly comic drama from Martin McDonagh (a versifier of vulgarity) is trenchant and crude entertainment that surpasses his skilled efforts in Seven Psychopaths and In Bruges.

In Three Billboards Outside Ebbing, Missouri there is local, tattered chicanery about seven months after the awful demise of a young woman, and it's up to the mother Mildred Hayes (Frances McDormand, longtime off-screen wife of Joel Coen and of Hail, Caesar! and North Country) to make a statement.

She does so by pressuring cancer-stricken Sheriff William Willoughby (Woody Harrelson of LBJ and next year's Solo) with the commissioned controversial titular signs of why due process or any resolution remains (at least for her) in a purgatory.

Her justifiable act exacts calamity and rapprochement in ways that manifests the graceful means the spry writer/director has with the ethics of ambivalence and sincerity. The good, bad, and ugly are put to the test and against one another with intense, precarious depth.

McDormand empowers a rough-hewn, yet gutsy (and abused) woman with expertise to make Mildred's arc viably vivid, and Harrelson's harried lawman has a similar sinuousness with his deviously determined distaff counterpart.

Peripheral characters filled by the likes of Lucas Hedges (after a fine turn in Manchester By The Sea), Abbie Cornish, and John Hawkes hardly go unnoticed. However, the most pointed complementary presence in this perceptive cinema is the shameless, spiteful second-in-command Officer Dixon disclosed in a surprisingly canny, cutthroat, and callow way by Sam Rockwell (Moon, Conviction, The Way, Way Back, as well as McDonagh's more satirical Psychopaths).