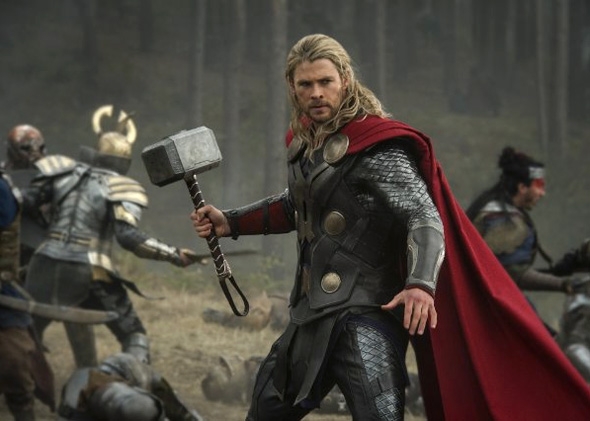 
Generally I find this category of film present far too much battling and not a great deal of substance.  Thor: the Dark World doesn't have a complex script but it is enough to bring focus for the specialized problem faced by these Super Heroes.

The plot obviously revolves around Thor but it begins with Captain America who is probably the most interesting of the Marvel characters in this series of films.  But the man with the hammer moves into the plot quickly and is placed in the position of saving all existence from the dark side.

A red fluid named Aether has been hidden deep to keep it away from the Dark Elves who will use it to destroy and darken the Universe.  While Thor (Chris Hemsworth) works to being peace to the nine realms, Jane Foster (Natalie Portman) waits on Earth.  When she finds a wormhole to travel in she heads to locate Thor, but she finds the Aether and it takes residence inside her body.  She then has the power everyone wants.

The battle goes back and forth through out the story and eventually after the credits the Aether ends up in the hands of someone else.

What works best here is the human equation of the earthlings and the super heroes. Thor constantly calls out to Jane, Jane, Jane which sounds like the voice track from Tarzan film.  Portman flying on an open sailing ship gives off the same vibrations she did in Star Wars. Kat Dennings as Darcy a human carries much of the comedy as she reacts with everyone of importance in the film.  It is that comic interaction weaved through out the film that makes it better than it truly is.  It becomes fun to watch rather than a battle every second scene.

The special effects which created the many lands and the futuristic cities on the Earth are stunning, but we now know all of that stuff is done in computer programing and it is no longer as impressive as it was.  But non-the-less it works very well here.

Fans of these films will be quite satisfied, and others will be impressed with the story that has light moments, dramatic battle scenes, and a beautiful universe as a backdrop.