This is the End 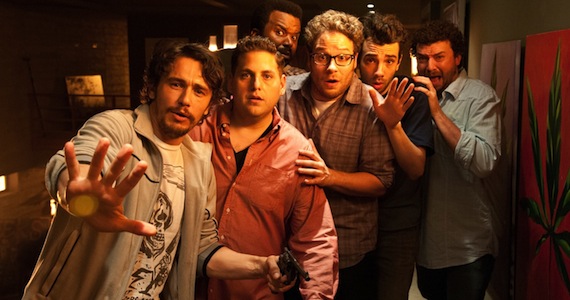 
Another high-concept apocalyptic summer film from the pairing of Seth Rogen and Evan Goldberg is an anarchistic sinkhole of a full-length feature.

Their initial "departure" of a directorial outing This Is The End glorifies celebrity cameos as Hollywood actors like James Franco, Rogen, Jay Baruchel, Craig Robinson (Peeples), and Danny McBride are apparently themselves in what seems like YouTube on celluloid.

Not that many (especially of the Superbad/ Pineapple Express/Your Highness demographic) will object to the smug, crude, deeply juvenile riffs/set-pieces with the occasional illuminating special effects and in the company of these "comedians" who make it much longer than others in the film. They aren't afraid to provide those risible, revelatory "confessional" moments.

All kinds of catastrophic seismic happenings for at least Baruchel (appealing for some in She's Out of My League and the animated How To Train Your Dragon) seem to indicate the realization of The Book of Revelations, or a zombie, alien or demonic invasion. The Exorcism of Jonah Hill comes after the aforementioned arrested-development type guys are holed up in Franco's lavish fortress of a pad with some props needed for self-preservation from Flyboys. Some of the issues with the bonding are complicated by the presence of a crashing McBride and the underlying resentment between Baruchel and Hill (who in a prayer refers to his Moneyball success). But, the owner values his artwork and friendship with Rogen as Baruchel would have preferred staying at Rogen's more modest if equally accommodating pad.

Maybe the intent of Rogen and Goldberg is to give a little prurient spark to an in demand genre (especially early on when it comes to Michael Cera unleashing an unconvincing lascivious, hedonistic side). One that has the swagger of 21 and Over and Movie 43 but similar depth of story which nary justifies its (more than prolonged real) run time.

Still, there's the like of a robbing axe-wielding Emma Watson (of the upcoming Bling Ring) and the big cameo (who had much success last year opposite Hill in a remake) in the service of a pretty nasty McBride as well as talk of stuff like Milky Ways that will impress those who frequent certain websites that folks like Will Ferrell and Adam McKay preside over. A blown-up vanity project having a little of the Judd Apatow not so mindless moxie beams up to raunchy, tetchy, toking heaven where 80s Boy Bands and hedonistic flash mobs are all the rage.