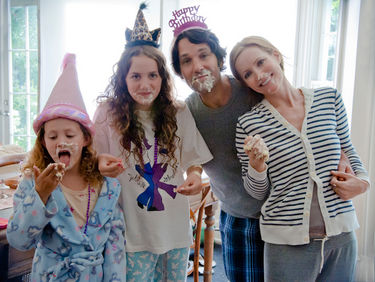 
The ups and downs of marital life at the "old age of youth" are on display while being economically current in Judd Apatow's new cycling, overstuffed comedy.

Like Knocked Up, his This Is 40 follows the lives of Pete (Paul Rudd) and Debbie (Leslie Mann, Apatow's real-life misses), as the latter is in age denial. But, it may change when she starts getting ready for his "big" day. Pete and Debbie are now at the forefront and Rudd and Mann feel like real spouses as Mann in particular knows how to elicit a wide emotional range from her own personal experiences.

Their daughters, teenaged Sadie (Maude Apatow) and 8-year-old Charlotte (Iris Apatow) are providing enough turbulence while Pete and Debbie have to deal with their dads (Albert Brooks, John Lithgow) and business downturns.

The gags often have a spur-of-the-moment feel to them with an adult pungency, given the honest Apatow imprint. Even though the story doesn't really seem to have a chief driving thread, the script's actorly friendliness goes a long way to enliven the proceedings through what seems like many sidebars.

Debbie is contemplating what to do about one of her promiscuous, perhaps embezzling workers (Meghan Fox) while Pete is more than restless due to his dependent dad (Brooks) and the current steep decline of his record label. With scene-chewing ardor comes Bridesmaids nominee Melissa McCarthy on another winsome roll as an angry mother of Sadie's classmate (expanded in the uproarious final scroll outtakes).

This Is 40 touches on the importance of how relationships tick and making them last as the observational journey essentially having Pete and Debbie not going through any major transition, in reality ending up where they started. It's a ride that may connect with its generous dollops of vulgarity and sentiment to the core demographic of Knocked Up who may have kids of their own now, at least closer in age to Charlotte.

Apatow nicely gets into the details from the use of an iPad, a doctor's office, hormones, musical nerdy preferences, and private urges (also rendered well in lesser mainstream efforts like City Island). Even if the result threatens to buckle from what seems like a lopsided mini-sitcom marathon, the rude mayhem and intimacy is less mindless than an amusingly recognizable extended stay with parents we're not bored being around.