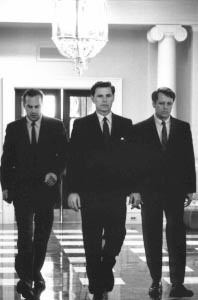 I remember waiting at a red light at noon on Friday, October 26, 1962 as a sudden blast of sound filled the air from the civil defense alarm system.  For a moment I envisioned the end of civilization and then I realized it was noon on Friday and the alarms were tested every week at that time.  I laughed at myself - the kind of uncomfortable humor that comes when the worst has not happened.  Thirteen Days explores the October crisis that brought all of us perilously close to nuclear war when John F. Kennedy was President of the United States.

With Bruce Greenwood's convincing performance as JFK and a story which is more convincing as fiction that reality, we see the powers in the American government at odds as the buck stopped on the president's desk.  The actual events of October 1962 are intriguing enough to hold our interest, but Australian-born director, Roger Donaldson's presentation keeps us riveted to the screen as the events unfold.  Watching black and white footage to begin certain scenes we are transported back in time as if watching history, then as the scenes fold into color it appears we are a part of the inner workings of the highest levels of government and we find ourselves hoping for the success that we already know has happened.  Similar to Apollo 13, we know the answer, yet we become involved in the crisis.

Told from the point of view of Kenny O'Donnell (Kevin Costner) we see Attorney General Robert Kennedy (Steven Culp) and JFK working in tandem to sort the divergent positions received from advisors.  Experiencing Adlai Stevenson's (Michael Fairman) questioning military action and delivering his famous "I'll wait until hell freezes over" for an answer as he challenged the USSR's UN delegate along with ABC's John Scali as the carrier of unofficial policy which saved the day, balanced against the hard line of General Curtis LeMay who was ready from the beginning to bomb Cuba provides a history lesson with a heart beat.

We also learn of reasons to lie when it will protect us from war as we watch Commander William B. Ecker's spy plane shot up over Cuba and his explanation that birds did it after hearing from Kenny O'Donnell that a plane damaged by USSR artillery could start a full scale war.

As the crisis continued twenty four hour confessions were offered at Catholic churches and white house phone operator Margaret (Karen Ludwig) was chosen to make calls because she wasn't intimidated by anyone.  The President was given weak support from Congress, and Secretary of Defense Robert McNamara (Dylan Baker) was forced to give direct specific orders to the military to hold them back from their natural instincts.

As we watch Greenwood's JFK maneuver through the crisis we can't help but understand that JFK's knowledge and sense of history served to begin the end of the USSR, but more importantly his determination not to attack until all solutions were exhausted both saved and changed the civilized world.

This is a great history lesson and a film that brings pride to Americans and Russians alike; beyond that it is incredibly interesting and compelling to watch.