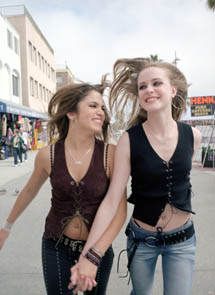 A side of mother/daughter relationships that makes Freaky Friday quite tame is evident in Catherine Hardwicke's observant, yet disturbing Thirteen.

There's a link between the director and co-star Nikki Reed as the dangerously chick Evie.  Reed co-wrote the semi-autobiographical tale with Hardwicke, once in a relationship with Reed's divorced father when she was thirteen.

Hardwicke's handling of a radical change of an average Valley girl entering pubescence is bracing and memorable.  That girl is Tracy, played by Evan Rachel Wood known for her part on ABC's "Once and Again."  She has more on her mind than being a good student as she advances through junior high school.

Tracy's single mom (Holly Hunter) works out of their home as a hairdresser and her friendship with the motherless Evie may have some similarity with the one seen in Poison Ivy which starred Drew Barrymore as the "bad" girl.

But, soon, the life that Racy leads is synonymous with Evie's affinity for drugs, sexual promiscuity, body piercing, and shoplifting.  Wearing tops like lap dancers and drawn into situations that many adults never enter appears to be the realization of Tracy's dream.  Kip Pardue of Remember The Titans is one of the "older" virile types brought to the attention of Tracy by her rebellious, risqué new friend.

Thirteen is unnerving in many ways and Hunter is expressive as a mother who attends AA meetings and is involved with another loser (Jeremy Sisto of Wrong Turn).  Hardwicke maintains a tough verisimilitude throughout with the interplay between Wood, Reed, and Hunter finally reaching a harrowing ethos.  This dysfunctional rendering of "girls gone wild" is one that happens from living life in the fast lane.