There Will Be Blood 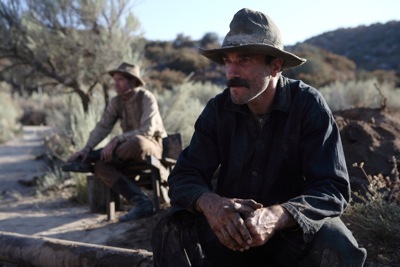 
Audacious and artistic, yet a bit off-putting, Paul Thomas Anderson's new sprawling drama still is something to behold thanks to another stellar portrait of greed by Daniel Day-Lewis.

In There Will Be Blood, the actor is creepy yet richly compelling as misanthropic Daniel Plainview who'll end up exploiting a family for the black gold in their desolate property.

Anderson, in only his fifth film, the last being Punch-Drunk Love, shows his range in working meticulously from Upton Sinclair's 1927 tome "Oil!". Instead of contemporary Southern California, much of his latest is set a century ago and he seems to have researched the cadences of what come out people's mouths.

The originality also extends to the musical score formulated with instances of howling and screeching by Jonny Greenwood (of the band Radiohead).

The title might be a little deceptive, but there are some strikingly visceral moments, whether in drilling mishaps, whether on an oil rig, or a heated confrontation.

Really, Anderson has made something deft from the way the film is so fueled by the Plainview (the way he sees the world around him?) that many may think it is barren in other respects of action and storytelling.

The main tension occurs between Plainview and Paul and Eli Sunday, both effectively played by Paul Dano (Little Miss Sunshine), the former representing the family's business interests, the latter looking for support and membership in his congregation.

So, if the film doesn't find its way in the tragic end of things considering what little information there is divulged about Plainview, intrigue occurs from a religious angle.

If some may think There Will Be Blood is arch and overdone, it's not because of Day-Lewis who immerses himself into this sociopath, perhaps not so unlike a Charles Foster Kane. The stranger aspects of this unsavory oilman who wants to distance himself from humanity (his only real bond is with son H.W. played by Dillon Freasier) may be a turn-off, and a break-up and later confrontation is something that Anderson uses to a surreal, even apocalyptic effect.

The talented filmmaker works sharply with his crew, especially lenser Robert Elswit, when it comes to establishing shots and execution of complex scenes. Like Day-Lewis's nasty, yet sure-handed tycoon, this picture is sweeping, yet intimate that boldly engages in a measured way.