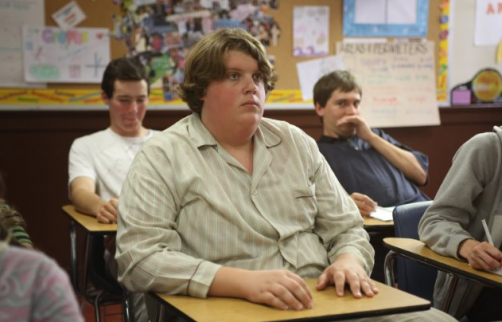 
A wisely rendered, un-slick low-budgeted coming-of-ager centering on an obese high-school outcast overcomes its unhurried approach. It has an understanding for the demanding onlooker who will be rewarded for the salutary, sobering worldview which it presents.

Terri stars Jacob Wysocki and John C. Reilly with these two creating the central relationship crucial to what is more character than plot driven. In this respect there is some similarity and thematic resonance to lesser known pics like The Wackness and the recent word-of-mouth Paul Giamatti starer set around wrestling, Win Win.

The relative newcomer in Wysocki as the titular character has an authenticity that works from a pronounced, diminished social skill set leading to loneliness and a loathing of school.

Terri dwells in a cluttered ramshackle abode with Uncle James (Creed Bratton of TV's The Office) in the onset of Alzheimer's disease. He installs mouse traps for his Uncle in the attic, and later watches a falcon finished them off when he brings them to the woods.

His tardiness and overly casual dress-wear at school gets the attention of Reilly's multiloquent vice principal Mr. Fitzgerald. The regular Monday "guidance" meetings doesn't prompt Terri to say much at first to the somewhat goofy school official with good intentions.

An emotional pull comes in spite of a languishing pace as Terri has apprehension as a night of drinking and bonding with Chad and Heather has shadings of the detained "Brat Pack" in a famous John Hughes movie.

Sensitive director Azazel Jacobs uses a well-wrought script not to use the characters as pawns or gags, letting the pathos and comedy naturally percolate as joy and melancholy amid flawed people, young and old, has resonance into where they are heading.

An unobtrusive production, meager as it may be, effectively captures the mood of how Terri enters a hedonistic phase as he and Chad prod their way to a funeral of Fitzgerald's secretary. Here is cinema cognizant of the fact that there aren't any easy answers especially with individual vulnerabilities of those in need of what is essential for them. Thus, Reilly (toned down a little from his scene-stealing insurance salesman in Cedar Rapids and occasionally akin to Cyrus) and, notably, a promising Wysocki, always are up to the challenges of material never devolving into fake sentiment when it comes to taking and giving