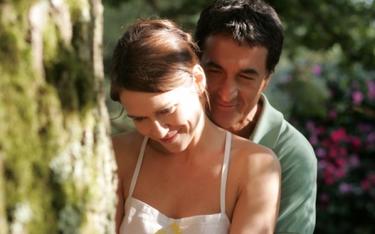 
This French box-office hit is based on Harlen Coben's hugely successful book, and has much potential as a summer arthouse sleeper if it's favorably distributed.

Tell No One (in French with English subtitles/Ne Le Dis A Personne) is a thrilling, shifty tale with little Hollywood sensationalism and captivates in Hitchcock "wrong man" fashion.

Actor turned director Guillaume Canet brings much energy and Gallic finesse to the source material with a deft performance from Francois Cluzet.

Cluzet is Dr. Alexandre Beck, as one eavesdrops from the outset of the initial marital bliss with wife Margot (Marie-Jose Croze of The Diving Bell and the Butterfly) before an attack leaves him a widower . Beck comes under a second scrutiny when Margot's homicide case is reopened. The grieving man gets a mysterious on-line message with video with insinuations of his wife seemingly alive before admonished to "Tell no one. They're watching".

The crafty, cryptic narrative has Beck between a rock and hard place as the authorities uncover a couple of bodies where his wife met her demise. This exploitative situation sets into motion the protagonist as a fugitive to understand the truth about Margot.

Because of Canet's smoothness with a cast that is genuinely immersed in the material, the deceptiveness unfolds into an intriguing procedural which does at times stretch the limits of disbelief. Yet, there is an emotional pull of this ordinary guy in a frantic state, and Cluzet pulls it off with nerve-wracking aplomb. And, there is more than capable backup from Francois Berleand as an obsessed top cop, Kristin Scott Thomas as the spunky, best friend of a sister-in-law, a rigorous, steely attorney in Nathalie Baye, and especially Andre Dussollier as someone who may know more than he lets on.

Tell No One obviously goes through some heavy plot machinations as it's easy to get behind Dr. Beck as a gleaner of information. For some, the implausiblities lead to a coda that many could have forecasted, yet makes sense. This cinematic slight-of-hand could have been more taut with some of the thorny passages left on the cutting room floor. But, when the story doesn't resonate like it should, the pulsating, sometimes bone-crushing action sequences are a dynamic distraction.