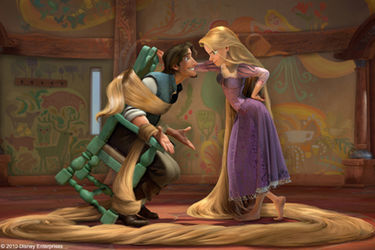 
Disney brings another fairy tale princess to the animated screen under the title of Tangled, but it's really the story we read as kids called Rapunzel

Baby Rapunzel receives a magical flower with healing powers, but because of that she is kidnapped
by Mother Gothel (voice of Donna Murphy) who uses the magic in Rapunzel's hair to remain young.  For Gothel Rapunzel is the fountain of youth.  To keep the young girl with very long hair available as a youth potion, Gothel holds her in a tower located in an isolated place in the kingdom.

All that long hair is used in numerous functions for Rapunzel and Flynn Ryder (voice of Zachary Levi) a naughty sort of good guy who is constantly in trouble, probably because he steals for a living.

Ryder is introduced as he is in the process of working with rogue villains who are clumsy enough to bring fun to each attempt to foil Ryder's escape with a stolen prize that turns out to be the crown for the princess.

During his escape he wanders into the land where Rapunzel is being held riding Max, a large white horse who's loyalty changes from chasing down Ryder to becoming his mount.  Their adventures bring the most fun to the story.

The 3D and animation work beautifully, but the story is somewhere near Pocahontas or Moulan in quality and interest, not up to the best of Disney like Beauty and the Beast.  It also spends most of its time with music and the plight of the princess as she longs to range as her eighteenth birthday approaches.

The beauty of the flying lanterns which mark her birthday are visual to her each year but she is unaware they are a testimony to her birthday sent up by her parents and the folks in the village.

Tangled is a pleasant Disney animated film, but remember as my grandson said, this one is more for girls than boys.