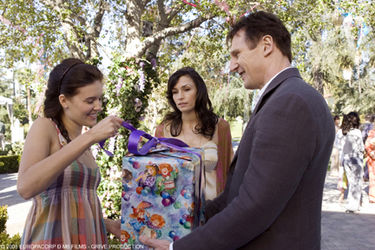 
This slick, silly propulsive thriller from producer Luc Besson gives Liam Neeson a chance to be like Jason Bourne or 007.

Taken (in Albanian, Arabic, French and English dialogue) is very basic when it comes to human nature and primal instincts. A cinematic kineticism is evident at the outset as Neeson's former CIA agent helps out colleagues get a lady (Holly Valance) out of harm's way.

Neeson's Bryan wants to be there now for his adored 17-year-old daughter Kim (Maggie Grace of The Jane Austen Book Club). That means relocating from Langley to Los Angeles as Kim resides there with his ex-wife Lenore (Famke Janssen) and opulent new spouse (Xander Berkeley, remembered as a Secret Service agent in Air Force One).

Kim and her friend Amanda (Katie Cassidy) realize a dream vacation starting in Paris that goes bad in spite of warnings by her dad. After being snatched up by local Albanians which will lead to a high-priced auction to appease some Middle-Easterners, Bryan flies courtesy of Kim's step-dad to apply his efficient ruthlessness to those in his way.

From the studio that brought you Die Hard With A Vengeance, Taken predictably uses that as its mantra. Bryan has the means to drastically reduce the Albanian population in Paris averring, "I'd even tear down the Eiffel Tower in order to get my daughter back." The only noticeable actorly presence around Neeson is Olivier Rabourdin as the spry French operative chum Jean Claude.

The well-paced film from Pierre Morel (who made the more absorbing District 13) lets Neeson thrive on the devil-may-care relentlessness without much care to interventionist politics. Think of John Rambo rather than something more complex like Spartan. He doesn't even need arms or any weapon when he acts like a force of nature against his enemies. The earnestness may get to a point that elicits laughter, but the middle-aged actor remembered most for Schindler's List will probably get a boost to his star image from this intense cornball cinema.