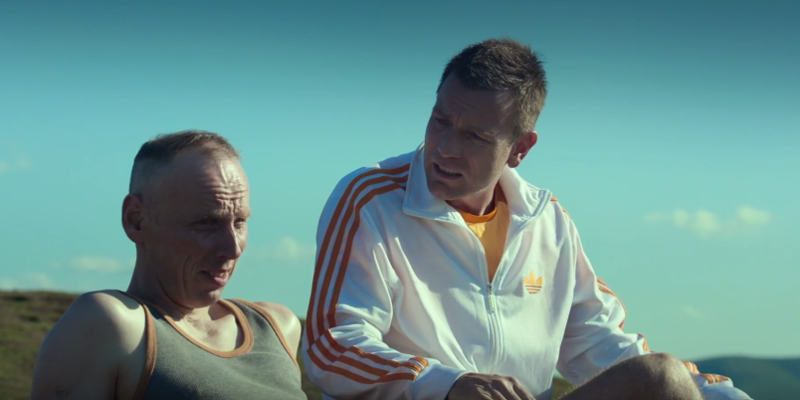 
It took awhile for Danny Boyle's new feverish nostalgia trip to gel, but T2 Trainspotting arrives to catch up with four despondent fortyish Edinburgh denizens who once had a hedonistic, overly mischievous ball before one sold out the others.

The iconic original captured the U.K. culture transition with poignant, intense kinetic energy that emerges over two decades later amid a more somber, sentimental tone long after adolescent revolt. It's a less subversive "looking back" cinematic collage that Boyle demonstrates again before he went on to make The Beach and others before hitting Oscar gold with "Slumdog Millionaire."

Revenge, regret, and familial ties thematically goes for a more affecting retrospective amidst a slighter storyline as finally devised by longtime Boyle collaborator John Hodge (Shallow Grave). Ewan McGregor's married (on-the-wagon) Renton or 'Rent Boy' returns to the scene of his drug-fueled young heyday to collide and bond with former partners-in-crime Simon or 'Sick-Boy' (Jonny Lee Miller), Spud (Ewen Bremner), and paunchy, mustached hothead Begbie (Robert Carlyle, who went on to success in The Full Monty, though waning of late, at least this century on celluloid).

The days gone by return again as a suicidal Spud (with maybe the most interesting character arc) still doped up and Sick-Boy allied with a spunky whore Veronika (Anjela Nedyalkova) in a blackmail scheme to turn a bar into a brothel being less resistant to their betraying friend. Especially when a chance to rob the European Union (in a nod to Brexit) arises. Some will like sequences featuring McGregor and Miller at a club and one in a restroom, besides Veronika's prodding of Renton to update his "Choose" monologue for the social media/digital age. Nedyalkova likely fares best on a less pronounced distaff side where Kelly Macdonald and Shirley Henderson just make appearances in essentially a disposable way as those once close to Renton and Spud, respectively.

Carlyle appears to still covet the manic, untamed Begbie who gets a comeuppance from someone he never really knew, while Renton has an emotional catharsis through a bereaving father and reliving old special vinyl back home. Even with Boyle's signature visual verve, this sequel just seems outdated from the yearnings and naughtiness from what has come before (with the exception of the vicissitudes of friendship) to definitely leave a decisively less distinctive imprint on four charismatically outrageous ruffians in mid-life crisis.