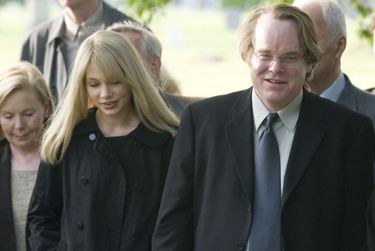 
Intense, in its own convoluted way, the unusually titled Synecdoche, New York churns with cramping anxiety and paranoia.

First-time director Charlie Kaufman, known for his mobius-strip scripting patterns, has come up with something brewing with much thought and rotting when it comes to an overreaching artistic plane.

The metronomic title almost seems like a major takeoff from the director's sinuously delightful script of Adaptation as it's set in upstate Schenectady, NY.

Cotard (Hoffman) and Adele (Keener) are successful in their careers, she as a painter, he at a local theatre company. From their lifestyle, they don't seem that bonded on an emotional or mental level. Adele and their daughter are off to Berlin for her big opening, with Caden becoming more physically disabled.

Strange things begin to become evident as Caden gets more cozy with curly red-coiffed box-office worker Hazel (Morton). In time (now 2009), an eroding Caden uses a grant to make a huge stage with a warehouse as his bigtop.

Synecdoche, New York then spins off into different strands that feels deeply neurotic, but somehow keeps a challenged viewer mysteriously magnetized towards Cotard's on-the-edge milieu. His sweeping New York project has a dissimilar-looking Tom Noonan playing himself and an actress (Watson) who resembles Hazel to play her.

The mundane surely goes through much overstuffed turns in mutations on many levels, not just in the depiction of characters. Caden's melancholic nature crosses reality into his stagecraft which may not be inspired the way he perceives it to be as he realizes he isn't right for the omnipotent role.

Hoffman, on a roll at the end of last year with pics like Charlie Wilson's War and The Savages really channels into Kaufman's ruminations into the human condition and all of its inherit depravity through realizing truth and artistic freedom. Understanding of one's talents and expression is really prevailed in the forlorn Cotard, and Hoffman succeeds in preoccupying the onlooker with his emotional and physical distress.

While it's easy to be lost in the director's imaginative, if tenuous tail of a translation, Hoffman and his fellow actors make the often discomforting doings bearable. Morton is simply an adorable presence, with Watson just right as the "other" Hazel. Hope Davis makes for a pungent psychiatrist, while Michelle Williams endows an esteemed stage actress with bonhomie who fills the part of Adele. Dianne Wiest and Jennifer Jason Leigh use their costumes and voice, respective, to accent their backup.

This evocative postulation by Kaufman feels like a personal venture that even his own devotees might benefit from a second viewing. It's clear that designer Mark Friedberg and the visual effects crew headed by Mark Russell are into his tightly drawn, fanciful vision, a strange, often shifty confession of a dangerous, heavily bruised life.