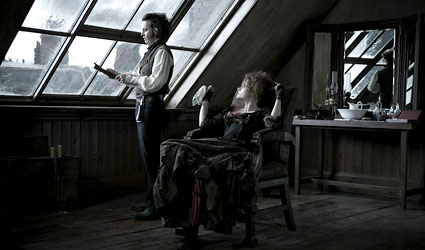 
Sweeney Todd: The Demon Barber of Fleet Street is like a day in January, dark and bone chilling.

Under the direction of Tim Burton, Johnny Depp carries the anger and revenge of the menacing barber Sweeney Todd, his new name as he returns to the location of his arrest and crime against him. Fifteen years before his daughter was kidnapped by Judge Turpin (Alan Rickman) and his wife beaten into the street. Todd was arrested per the order of the judge, who makes the daughter Johanna (Jayne Wisener) his ward.

As Todd returns he is bent on revenge, and quickly establishes himself as a splendid barber by defeating Signor Adolfo Pirelli (Sacha Baron Cohen) in a speed shaving contest. Mrs. Lovett (Helena Bonham Carter) a maker of disgusting pies takes him in, and with his shinning new silver straight blades he begins the bloody trail of sliced throats. Timothy Spall's Beadle Bamford the one who carried Johanna away is an early victim and the Judge Turpin has a place reserved on the barber chair.

In a somewhat strange turn Burton has Depp and Bonham Carter signing their parts which sound acceptable until Ed Sanders, who plays the kid freed from Signor Pirelli by quick blade action from Todd, shows them all up when he begins to use his signing voice.

Burton uses everything that makes his audience squeamish; roaches, brown ground meat, blood spraying from the rigged barber chair which collapses backward, immediately after the flashing blade releases a fountain of blood, and the victim flows through a trap door down to the basement floor. If one remembers the animated feature Chicken Run the method of removal of bodies will be clear.

The film has elements of a comedy, music and horror, but the dark bloody streets, rooms and the barber shop, lean the film toward what is dark even for Tim Burton. While Bonham Carter is wonderfully cynical, Depp flashes his blades in a style learned from Edward Scissorhands.

While the script is not suspenseful, there are no sudden surprises, it is none-the-less exceptionally creative even when the blood flow is far beyond reality. The lesson of course is that revenge is a two edge sword. While the story is filled with bumps and creepy things walking and crawling around, the technical aspects are sound and effective even when they exceed reality.

Not a film for your grandmother but unique and creative enough not to be missed.