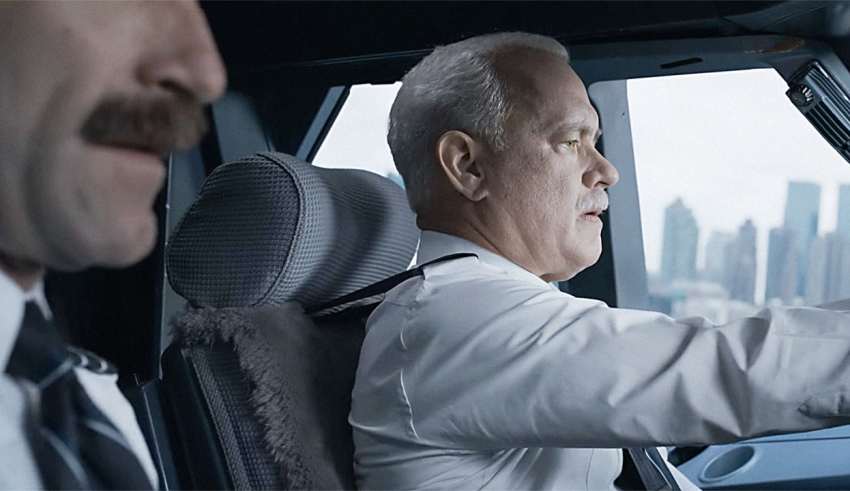 
Sully is the first collaboration between Tom Hanks and Clint Eastwood though it doesn't soar to the extent of the latter's American Sniper or the former's Bridge of Spies. Also, the Robert Zemeckis union with Denzel Washington, Flight which is more closely related subject-wise, even if the main characters are much different considering their personal and professional milieus.

The fact-based tale centers on a US Airways Jet emergency landing in the icy waters of the Hudson River by Hanks's older-looking Chelsey 'Sully' Sullenberger. The re-enactment depicts some spectacular action after engine failure and a call to a distressed wife (Laura Linney of Mystic River and much earlier The Truman Show). Not before a nightmarish explosive sequence around Battery Park and skyscrapers that doesn't bode too well on the 15th anniversary of 9/11.

An understated savvy is key to what this probed pilot projects from Eastwood's affectations around emotional investment situations require for the before and after of saving 155 passengers on a fateful January day. The issue is not really getting to know a man beloved in the court of public opinion, to better understand the onus befalling him or an amenability. Hanks adequately services what the filmmaking and writing allows for him to showcase in a different man of valor. Especially from incisive pithiness alongside an adulatory co-pilot (Aaron Eckhart) when up against a pushy, dictatorial oversight committee. Sully turns out to be more successful when airborne than later when reflecting on the 'Miracle on the Hudson' with Hanks more phlegmatic and passionless than as the beleaguered yet fierce helmsman in Captain Phillips.