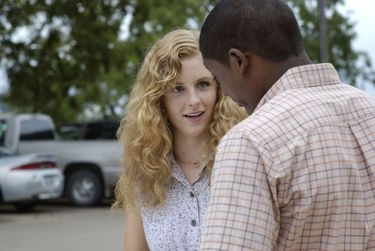 
The titular character of this appealing, baseball-minded fish-out-of-water tale gets his nickname from the sweet way a pitcher handles a baseball.

Sugar, mostly in Spanish with English subtitles, delivers an extra-base cinematic hit, as Anna Boden and Ryan Fleck (who scored with the indie Half Nelson) are committed to reaching a wider audience though arguably with greater marketing obstacles. It has a warm look to it, and a sharp salsa soundtrack.

It helps that the release nearly coincides with the opening of the Major League Baseball season, as this conventional, if uplifting saga leisurely moves from the Dominican Republic (where everyone seems to adore the U.S.) to Arizona, rural Iowa, and finally New York.

The filmmakers have wisely recruited untrained thespians with much success, especially in Algenis Perez Soto (who auditioned against 600 others discovered playing the sport in the Dominican Republic to win the role) as the lead, Miguel Santos, a composite of the Dominican Republic athelete who dreams of being contracted to play baseball in the U.S. Sugar delves into the nuances of a sometimes cold-hearted national pasttime, with inherit immigrant strife, as Santos leaves behind his beloved girlfriend and mother.

From his tight-knit community in San Pedro De Macoris, the nineteen-year-old first winds up in Arizona, then Iowa, playing for a Single-A squad in Bridgetown, living with a Presybterian clan who regular welcomes Dominican prospects. Rayniel Rufino as Jorge is really the only one he talks to and understands completely, as the culture and language barrier is evident. There will be a rough period (including racial tension) as there is not much going for Miguel on his move to the Big Apple.

Boden and Fleck's latest effort poignantly examines the effects of realizing one's ultimate ambition as Santos considers where he stands when not on the diamond. Sugar, even with not much action in it, turns out to be more richly understanded and natural than most of the sports genre that has much resonance because of how Soto embraces the kind of disparate, often troubling experiences that have helped some nonprofessionals gone on to the World Baseball Classic and Major League stardom.