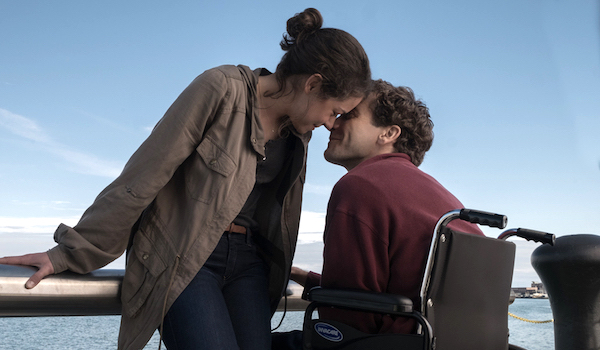 
In this straightforward, solid biographical drama Jake Gyllenhaal offers another canny, well-calibrated example in his gallery of interesting characters.

Gyllenhaal's Jeff Bauman became a celebrity of sorts after the tragic incident in the graphic interludes where both his legs were lost above the knees and was instantly in a discomforting position with folks wanting to get their picture taken with him. Not realizing the crippling angst he was enduring for a man trying to survive and return to a certain normalcy.

Green (Joe, Our Brand Is Crisis) delineates Bauman's private battle well (as Berg did more for the Boston Strong mantra) in thoughtful, well-rounded strokes that utilizes technical advancements (as a Lt. Dan joke is made).

Like David O. Russell's The Fighter the characters in Jeff's orbit are generously doted on, like Lenny Clarke as a droll, sharp-tongued uncle, not to mention Miranda Richardson's liquor-swilling, loving mom, and Clancy Brown as the benevolent Jeff Sr.

The key portion of the story from scribe John Pollono involves Jeff's relationship with runner and recurring sweetheart Erin that adds a truthful complexity to the proceedings. Tatiana Maslany is notable presence having to handle Erin's remorse being that Jeff was on hand to see her cross the finish line. When the focus of the filmmakers is on Jeff/Erin situation, the actors' earthly, nuanced efforts really provide a more genuine, powerful Stronger.