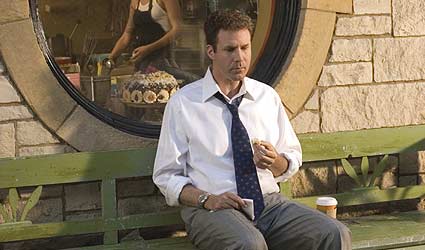 
Will Ferrell is a man-boy again on screen in the meditative, finely-tuned comedy-drama Stranger Than Fiction.

Under the capable, wry direction of Marc Forster (Finding Neverland), the script by newcomer Zach Helm has Ferrell's tax auditor Harold Crick having something weird happening in his precise, obsessive daily milieu.

Starting with the brushing of his teeth, a woman's voice-over says what he's doing with some unhappy, portenting clues about Harold. Perhaps he's just a character in a story.

Dustin Hoffman (also from Neverland) is Jules, a literature professor Harold consults for assistance. Harold is trying to audit Ana (Maggie Gyllenhaal of World Trade Center, Trust the Man) a baker, but begins to fall for her as his existence start to shatter. Emma Thompson (Nanny McPhee) is the authorial woman Kay who is aloof and afflicted with writer's block putting Harold through all of this. And, Queen Latifah (Beauty Shop) is the woman who could help get Kay out of her doldrums and finally lay the protagonist to rest.

Like Adaptation, there is much inventiveness on hand, textured in part by graphics and literary nods. Forster has quiet, amusing comments on politics and a comfortable contemporary culture all on the periphery of the primary narrative, which takes hold, though not quite to the degree of the above-mentioned Charlie Kaufman sharply clever script.

Could it be that Ferrell is finding his way like Jim Carrey from the stuff that farce is made of? The innocent Harold could be a relative to Truman Burbank, and in his coming-of-age it's all kept pitch-perfect in a manner that intimates one with his precarious plight. When Harold and Ana get together one feels the tenderness especially when she provides a cooking lesson; Gyllenhaal and Ferrell never overplay their scenes so the romantic element never flattens out.

Also, Thompson and Hoffman fully engage their change-of-pace roles, the opposite of what they've done so well before. He invests low-key wit into his bright, efficient literary mind, while she is disheveled, trying to rise from what has been such a heightened state of being.

Stranger Than Fiction provocatively explores the intersection of finality and self-reflection. Even if it doesn't resonate like The Truman Show or Being John Malkovich, a subtle, impishness to connect to life is clearly evident from trying to express inner desires and words on a page leaving all the anguish and warmth out there to see.