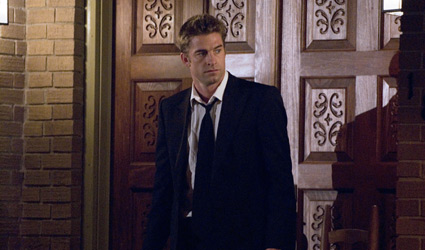 
Based on real events, a young couple is terrorized when they spend the night at a remote summer house after attending a wedding.

Liv Tyler and Scott Speedman are terrific as the young lovers and first time director Bryan Bertino allow us a lot of time to get to know them and care about what happens.

They drive up to the dark house in silence. She has tears in her eyes and his hands grip the steering wheel in anger. Once inside, they talk and make-up and at 4:00 A.M. a strange woman raps on the door asking for an unknown person. Thus begins a terrible night of terror for the couple.

Three masked people smash windows, bang on doors and move items in the house, but sometimes they just lurk behind their victims - it's darn creepy.

This film is different from most as there's very little blood and gore. It's scary all right, but most of it is from sheer anticipation waiting for the psychos to strike.

The actors are totally believable, the writing is smart and there is culpable suspense here. The idea of being menaced by strangers for no apparent reason is frightening and this film delivers the goods.