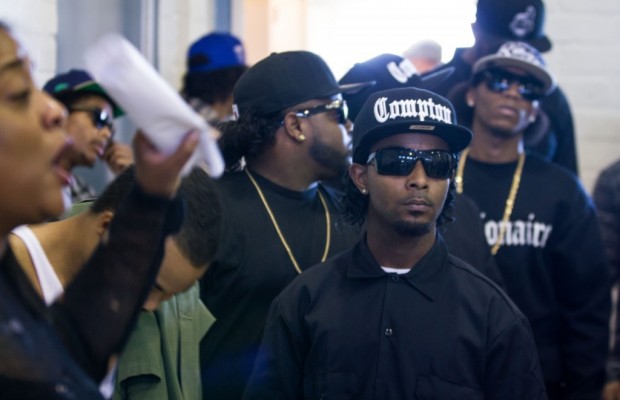 
An uneven dramatic, prolonged biopic of the influential hip-hop group N.W.A. doesn't quite offer the same kind of homage to the Compton, California inhabitants (Dr. Dre, Eazy-E, Ice Cube, MC Ren, and DJ Yella) that others of the genre have done if one is reminded of  8 Mile or even Notorious to a lesser extent.

So, if a rather witty, blistering Straight Outta Compton doesn't beat the rap of its gangsta attitude affiliation surrounding the eponymous recording in the late 1980s it has a cogent introductory rhythmic momentum that is captivating, perhaps even for those who could care less about some emotionally emphatic, if gratuitous monologues and lyrics many of which penned by the scowling Cube.

A lot of time and material is covered by F. Gary Gray (who worked with Ice Cube two decades ago in the hit Friday and excelled in the Mark Wahlberg-led ensemble remake of The Italian Job) with immediacy and shrillness, not really delving with decided insight into the unsavory actions of the controversial, yet seminal musical artists.

O'Shea Jackson Jr. (son of Cube) is actually a find, notably when it comes to comic timing in playing his dad and Corey Hawkins as Dre has a fine scene with a record label executive interested in N.W.A. Jason Mitchell's Eazy-E elicits power and intensity in a role which turns tragic while Dr. Dre records 'The Chronic' and meets the tall, lanky Snoop Dogg (Keith Stanfield). A very sizable roster well cast for the most part even includes the notable, rising Tupac Shakur (Marcc Rose) who may get his own treatment if John Singleton (Boyz In The Hood) gets the logistics of the project to his liking.

N.W.A.'s droll manager, Jerry Heller, is played by the versatile Paul Giamatti (who seems to have this role down after Love & Mercy and Rock of Ages) as the shady trickster the band comes to despise. Some may not find the treatment of Heller fair-minded, trying to have it both ways, but more of a rapscallion is the ominous if scene-stealing Suge Knight (R. Marcus Taylor who was involved in a hit-and-run incident during the shoot which left one victim dead).

As Straight Outta Compton goes (on and on) it isn't as self-sustaining as the filmmakers and producers (which include Cube and Dre) intended. At least to manifest its volatile reverberations with enough trenchant poignancy in hardly scamming a band with a raw, visceral effect on mores predicated on unrelenting defiant honesty.