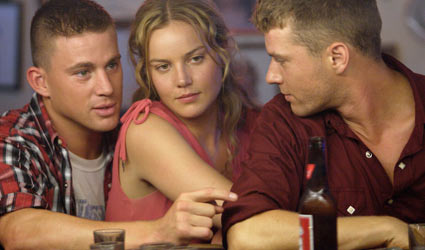 
Another Iraq war film may not be the kind of entertainment that those who frequent the multiplexes are looking for, but Stop-Loss hits a raw nerve with dynamism and intimacy.

Kimberley Peirce's first film since the acclaimed Boys Don't Cry has the ability to be compassionate and compelling as it tries to put perspective into a situation that deals with the escalation of violence that puts the U.S. in a precarious postion domestically and internationally. Also, concerning the title as the lead character is put into a dilemma that many civilians may be unaware of.

Ryan Phillippe (Flags of Our Fathers, Breach) gives a standout performance as Sgt. Brandon King who lead hundreds of successful missions on his tour of duty in Afghanistan and Iraq. The kinetic battle sequence when a car speeds by a road block is tense and tremulous for King and his combat unit. Automatic weapons and explosives rip in a slaughter that claims some innocent lives and leaves the unit shell-shocked.

Soon, he returns as a decorated war hero, held in high praise by a senator (Josef Sommer), and can muster up a solid speech for welcoming family and friends in Brazo, Texas (much of the film was shot in Austin and its outlying areas). After giving everything, Brandon wants to start life anew. But, it turns out to be not so easily.

Peirce works diligently from her brother's experiences in the 82nd Airborne, and her film unfolds initially in documentary fashion, and gradually illuminates the effects of war on them. The assimilation back into society allows the discontent concerning the war to be manifested, but also understanding the importance of comradery and being there for one's fellow soldier.

Phillippe speaks with an authentic Texas accent, and takes us into the heart and mind of a man involuntarily brought back into the service of his country. His interaction with his friends and unit comprehends the issues of returning to civilian life and not following the orders of their Lt. Col. Boot Miller (Timothy Olyphant of Hitman).

So, the controversy of retaining upper tier soldiers like the model Brandon King in a time of war after the draft ended with Congress relagating authority to the Defense Department when necessary by the President, the commander-in-chief of the armed forces.

Therefore, the script deals with the Brandon's conflict as his mother (Linda Emond) offers to drive him to Mexico. With friend Tommy (Joseph Gordon-Levitt) in hot water with his drinking, he decides to go against the wishes of sniper buddy Steve (Channing Tatum of Step Up) as a fugitive with the help of Steve's fiance, Michele (Abbie Cornish).

For some older than the main characters, the latter reels may be reminiscient of what went on in films like Coming Home or The Deer Hunter, even First Blood when Brandon is robbed and beaten while AWOL. While many scenes seem conventional and one may easily predict the fate of at least one character there is an honesty and candor. Especially in the performances of Phillippe and Cornish, reflected in their character's attitudes, the moral ground they choose to stand on.

In dealing with not really coming and needing to feel complete, Peirce effectively captures what many U.S. soldiers have to cope with. The vulnerability and emotions are all out there to be seen; Tommy shoots at his wedding gifts, Steve digs a hole in his front yard, and Brandon "sees" one of his men in danger at the bottom of a pool.

As Brandon gradually reawakens and rediscovers himself, there are touching scenes as he informs a family of their son's death (without suffering), and the moments in an Army hospital with battle-scarred Rico (Victor Rasuk of Raising Victor Vargas) who would go back to the front lines to get his family green cards.

Stop-Loss unfolds with deep authority and dramatic drive as the cast and crew make a unique, if harrowing situation more resonant as the title has gained more relevancy after first being used by the military in the first Gulf War. Peirce offers a poignant and surreal conclusion as the earlier images of soldier life during raids or in Humvees adroitly conveyed opens the window to the courageous, the disengaged and those closest to them.