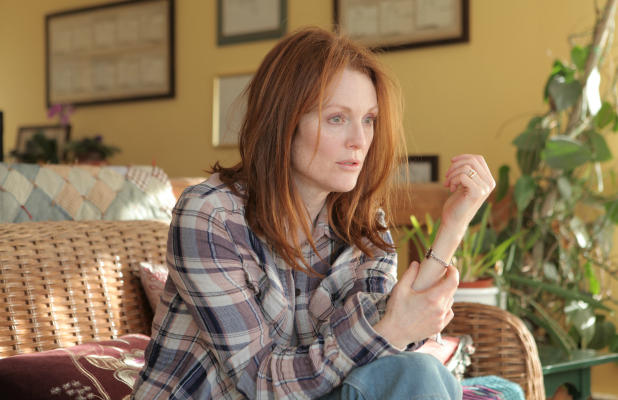 
A new adept drama from Richard Glatzer and Wash Westmoreland stars the versatile, hardworking much acclaimed Julianne Moore (Carrie, Map To The Stars as well as Pres. Coin in The Hunger Games: Mockingjay Pt. 1) that easily demonstrates a thespian prowess of amazing aptitude. Alec Baldwin as doctor husband John, as well Kristen Stewart, Kate Bosworth and Hunter Parrish are the most identifiable co-stars.

In Still Alice, based on Lisa Genova's much-read novel, her relative young middle-aged linguistics professor Alice Howland has received a diagnosis of early onset Alzheimer's disease and follows her coping with it in discreet, gradual absorbing fashion.

It's getting through the early sections which curiously may feel ordinary and perhaps giving viewers the impression of a movie-of-the-week that might drown itself in weepy sentiment and affectation.

But, those around the likes of former iconic Women's Tennessee Basketball Coach Pat Summitt who is going through a similar process may know, there is a striking transposition from the arc of Alice's plight that Moore evinces to enthralling effect.

The loss and confusion juxtaposed with wit and resignation adds to the somber, wrenching storyline that proves Alice still can be inspirational as later speechifying proves more resonant and persuasive than Pres. Coin's.

If the filmmaking and overall cinematic cohesion isn't quite on par with Sarah Polley's intimate, arguably more poignant take on a difficult subject in Away From Her, Moore's engrossing characterization stretches emotionally to match the enveloping austerity. Not that Julie Christie couldn't be as persuasive for a professional Polley opposite Gordon Pinsent in a different environment. And, Stewart as rebellious daughter Lydia can shine the most opposite Alice's trajectory with unexpected range in a tale that finally realizes the impact of its set-up with honesty and poignant melancholia.