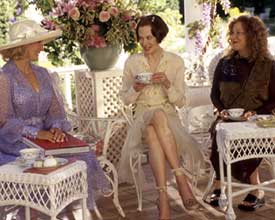 Nicole Kidman leads a strong cast in Frank Oz’s comedic and subversively ornate version of the 1975 thriller The Stepford Wives. Apparently Oz, scenarist Paul Rudnick, his partner from the 1997 hit In and Out, devised their model from contemporary mores affected by feminism, which caught fire in the US during the decade of Bryan Forbes’ original that starred Katherine Ross and Paula Prentiss. Unfortunately, until the film’s choppy, twisted finish, Oz’s attempt at “a real modern American comedy” doesn’t darkly amuse given the possibilities from Ira Levin’s best-seller set mostly in Connecticut.

The Stepford Wives has no trouble nestling into the perfect place, after nostalgic credits. The introduction brings one into the milieu of Kidman’s hugely successful Joanna Eberhart. Joanna has it all when given a standing ovation for her work on the top-rated EBS network. Husband, Walter Krespy (Matthew Broderick), takes her and their two kids to a quaint suburbia of the Big Apple located in Fairfield County. Lenser Rob Hahn collaborates with Oz as the production has many key scenes filmed along the I-95 corridor in cities like New Canaan, Greenwich and Norwalk.

Oz and Rudnick go for much visual humor off the new opulent, lovely community in underlining a theme of greed and consumerism contrasted from the early scenes in New York City. As Glenn Close’s Claire Wellington, a leading socialite of Stepford, passionate in everything about her life, welcomes Joanna and Walter with open arms, a feeling of perfection and a little hysteria starts to take hold with something strange about such a paradise with beautiful women, exotic floral arrangements, dream homes and luxurious cars.

Although The Stepford Wives adheres to the central narrative of its antecedent with women’s groups and a Men’s Association, the wit pops up from culture, politics and stereotypes, as well as the kind of advanced technology in today’s materialistic information superhighway. Pungent line readings come from Close, especially in a day at the Simply Stepford Day Spa when she conducts a class someone calls “Claireobics” Bette Midler, the Divine Miss M, is the sardonic nosy Bobbie Markowitz modeled after the Prentiss character. Her husband Dave, a jovial, rather rude Jon Lovitz, is happy that their family has made the move from the Upper West Side.

In this “battle of the sexes contending with the need for individuality,” the impressive cast includes the ubiquitous Christopher Walken as Claire’s urbane, adored husband Dave who presides over the Men’s Club, and takes care of problems that might happen. Getting plenty of laughs is architect Roger Bannister, an outspoken Roger Bart, nominated for his work on stage in “The Producers.” The gay man has political aspirations after moving to Stepford with his conservative attorney partner Jerry (David Marshall Grant). Kidman, Midler and Bart share in their feelings of isolation from the perfect community and their characters have fun at the expense of the “functions” of one Stepford wife, Sarah Sunderson, portrayed by Grammy Award-winning vocalist, Faith Hill.

The robotic terrier, Rover, helps Joanna move into the more clandestine area where suede and mahogany are a facade for a deeper, finally duplicitous social antagonism. This very computer-based sentimental creation without any history contains transformations like Bobbie’s dirty cluster of a home to spotless and elegant. That leads to the glamorous, climactic Midsummer’s Dinner Dance. The big party turns electrifying in some strange, abrupt way with Walter and Claire having their say about foibles in a way that tampers with the initial observations of urban sophisticates. The final disclosure and subsequent scene of domestic chores turns out to be a malfunction proving this polished edgy satire is “robotically challenged.”