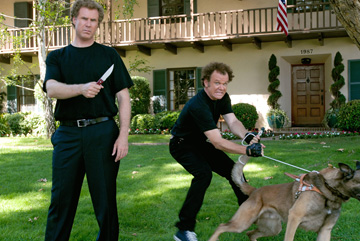 The Talladega Nights duo are back in true vulgar form to make fans of Superbad and Anchorman crack up as Adam McKay directs and Judd Apatow produces. So, they have fun in the "failure to launch" territory of unsuccessful, juvenile lads like Ferrell's Brennan and Reilly's Dale, who turns out to have some drumming talents.

Step Brothers does much of its comic damage through lowbrow pratfalls of minimum-wage earning slackers who are content with the homes they've known their entire lives (with both now starting their fifth decade).

The story by Ferrell, Reilly and McKay is translated by McKay and Ferrell with ramifications for Brennan and Dale once Brennan's executive mom, Nancy, a curiously made-up Mary Steenbergen and Dale's doctor dad, Robert (Richard Jenkins) marry. The result being that now living under Richard's roof, the unsuccessful adult kids turn out to be resentful of one another. Especially when Dale has no choice but to share his room with Brennan.

The bickering, loathing roommates will gradually understand how alike they are, but the enjoyment that often arises comes from the spontaneity that marked the flailings of something like Dumb and Dumber. Some may feel guilty after their reactions to scenes involving autistic "children" around the age of Brennan and Dale.

Though maybe not long enough for the liking of many, the interlude of the twosome on the prowl for employment as their parents unleash tough love on them has a crude, ironic charm about it. It's clear that Ferrell and Reilly are hardly stretching themselves as their presence together is almost a punchline in itself.

As for their backup, Adam Scott primes the coeval pump as a successful, narcissistic brother and Seth Rogen turns in a congratulatory cameo. But, after The Visitor, Jenkins displays more comedic chomps than the leads in another role he evinces with effortless precision.

Ferrell and Reilly may not go into projects like Stranger Than Fiction or Chicago soon if the reaction to the raucous immaturity in evidence here not quite downing itself in sentimental syndrome. Yet, in a rather recessive economy it may not be shocking to have unwelcome additions like Brennan and Dale in more houses than parents or stepbrothers themselves would care to admit.