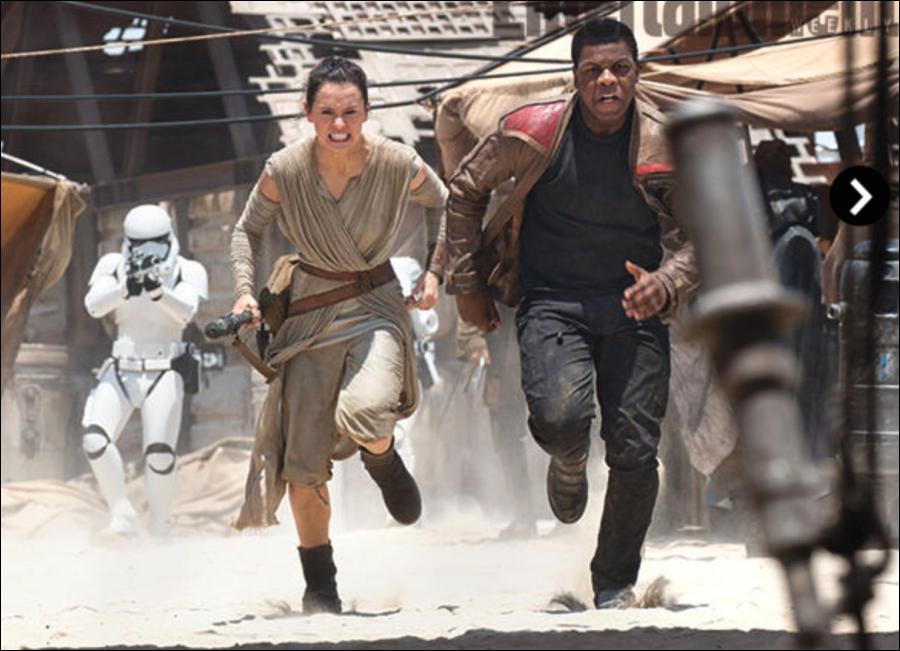 
A long time ago (1977) "Star Wars" began with Episode IV (A New Hope).  Now the last three episodes are beginning.

J.J. Abrams looks to be the right director and co-writer to make a once enormous space opera of good versus evil relevant again, studiously following in George Lucas's original footsteps.

While Star Wars: The Force Awakens (Episode VII) may be a tad derivative and lacks the graceful magic and wonderment of when Ben Kenobi first appeared with Luke Skywalker on screen, a sensation of the old serials is pumped back into the saga that knows how the formula works and allows room for improvement. It helps to have composer John Williams (with those soaring orchestral sounds) and writer Lawrence Kasdan involved again, too.

It's the energetic manner of which the noticeable wit and drama coexists again in what is truly reverential to what started it all (remember the Cantina sequence?) while forging ahead with new characters that look to help spark "a long time ago, in a galaxy far, far away." Another sagely character in the Yoda mold is a barfly with goggles named Maz (Lupita Nyong'o from 12 Years a Slave).

After 30 years some may question the nature of the re-emergence of an Imperial Empire-like First Order with a megalomaniac in Andy Serkis's Supreme Leader Snoke. His malignant imposing follower with a black mask that is taken off occasionally is Darth Vader-wannabe Kylo Ren, a finely shaded Adam Driver letting off some needed heat when necessary. Ren heeds to the First Order's mission of conquering which includes destruction if necessary (as fans of the series are reminded of the Death Star).

The Rebel Alliance is now the First Order Resistance run by General Leia Organa (Carrie Fisher) who has to find sibling and final Jedi knight Luke (Mark Hamill) who has gone into hiding when tutelage of an apprentice went awry. About to be captured crackerjack fighter pilot under Leia, Poe Dameron (Oscar Isaac of the enveloping sci-fi opus Ex Machina) puts what could help find Luke into a cute savior of a spherical droid, BB8 (product-placement heaven), which zips across the desert of planet Jakku.

Two other characters are key to the continuation of a rejuvenated saga - a newly named Finn (London native John Boyega of Attack The Block) and Rey (Daisy Ridley, a relative newcomer from Westminster, England). The former is a discouraged renegade First Order Storm Trooper who abets Poe from their main Imperial vessel to retrieve BB8 who has stumbled upon the later, a scavenger. Abrams has the trio confer a bit before realizing the urgency to get their small ally to the Resistance's cause. It helps when old Millennium Falcon Capt. Han Solo (Harrison Ford, in a meatier role than Fisher and Hamill with his suave bravado intact) and his large furry cohort Chewbacca (Peter Mayhew) to really accelerate the proceedings.

A consistently fun, if familiar excursion still is able to entice a younger generation, more so than Lucas's less inspired less painstakingly CGI prequels without the kind of vibe actors like Natalie Portman, Hayden Christensen and Ewan MacGregor could really excel in.  The filmmaker's simply light, effective touch with the material (discreetly using visuals effectively enough as a clanking is still intact) with an assist on the script by Michael Arndt (Toy Story 3, Little Miss Sunshine) incorporates representative themes concerning power, incidental valor, and familial dissonance.

Boyega, Ridley, and Isaac are fine trio that have Luke/Leia/Han potential even if Finn doesn't resonate like Rey and Poe do (though there are amusing scenes between Finn and Rey). Ridley has the grit and spunk of a Katniss Everdeen whose sense of independence contrasts well with the rascally idealistic Isaac (perhaps channeling a bit Han Solo). And, Driver's fascination with Ren's shifting personality bodes well for future installments.

With much organized, often referenced detail The Force Awakes eagerly launches Star Wars with plenty of excitement throughout in times when new dark stealthy armies of the first order inflict more pain than ever on a new hope.